Vintage Trouble are heading to Australia for the first time 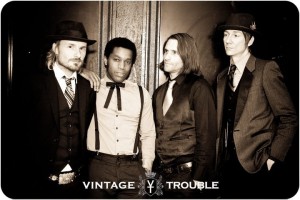 Hailing from Los Angeles, California Vintage Trouble put the soul back into rock. Vintage Trouble is a sensational, soulful four-man band featuring Ty Taylor, Nalle Colt, Rick Barrio Dill and Richard Danielson whose very essence screams out loud of the late 1950’s to 1960’s. Turned on by and tuned into the evolutionary period in music and life when there was a razor thin line between Rhythm & Blues and Rock & Roll, the band reconnects us all to one universal vibration. Their modern day classics transport the mind, spirit and body back to a sweaty, swinging, heart-thumping speakeasy. Their live shows feel like a sweet southern down-home revival mixed with a gritty, downtown edge. Inspirationally, Otis Redding, Chuck Berry and Ike and Tina Turner can all be felt in woven clothe that tailor-suit the band like honey to the bee. When the buzz tells you they’re near, get to them…and be prepared to be moved.

“Acts like VT are why I’m still in this business. Pure music, straight from the soul.. you can’t teach acts that shit”
Legendary Manager – Doc McGhee

“Vintage Trouble are here to reactivate the stomping vibe of the 1960s R&B.”
BBC, UK

“Vintage Trouble, who formed just over a year ago, didn’t sound like they were going to be the next big thing; they sounded like they already were.”
Live Music Scene

Vintage Trouble. Get into it. And be prepared for the awakening.

THE BOMB SHELTER SESSIONS
Out 27 JANUARY 2012 via Shock