The Angels with Dave Gleeson – Waiting For The Sun tour 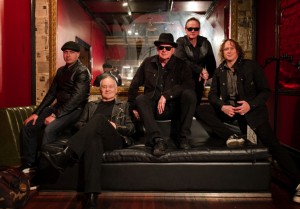 August 18th, 2011 (Sydney, Australia).  Mid 2011 saw Rick Brewster’s Angels fronted by Dave Gleeson of The Screaming Jets perform two mind-blowing sell out shows in Sydney and Adelaide. They showcased the band’s new single “Waiting For The Sun” as well as performing all the classics, leaving fans screaming for more and excited at the prospect of a new revitalized Angels.

Following that wave of enthusiasm, what had started out as a bit of fun between Gleeson and the Brewsters has created a new chapter for the Angels.

“The crowd was awesome, the Annandale Hotel was packed front to back. I was loving every minute of it.” – Dave Gleeson

“We had one rehearsal the day before and it felt like we’d been playing together for years. The audience was as pumped as we were and it just got better and better the more they gave it back to us. I just can’t wait to finish the EP and first album with this band and play more shows!” – Rick Brewster

With the single “Waiting For The Sun” having already been played nationally on Triple M, fans have had a taste of what to expect on the upcoming EP.

In August, Politically Incorrect launched their comedy CD to media and the entertainment industry at their HQ’s in Crows Nest.  The Angels closed the show with Am I Ever Gonna See Your Face Again, We Gotta Get Out Of This Place and Take A Long Line.  In a tough room the band blew the crowd away. Post show there were many comments on how amazing they sounded with Dave up front.

September will see the new look Angels head to Japan to play a benefit concert with Jimmy Barnes to help build a future for the locals whose lives were adversely impacted by the devastating earthquake and tsunami.

November/December 2011 will see The Angels embark on the “Waiting For The Sun” tour, which will be their first of many with Dave Gleeson up front. If the shows at The Annandale and Norwood were any indication, fans new and old are set for an Angels experience reminiscent of gigs in the early years at the Bondi Lifesaver in 1979.

“I thought it was quite interesting, it took you back to the grunt they had in the early 70’s and 80’s and seemed more focused.” Paul Christie – Party Boys

In launching the tour, The Angels have yet another surprise for their fans, releasing their first video since ‘Caught In The Night” in 1997. Stay tuned and watch out for the official “Waiting For The Sun” clip coming soon.

Tickets on sale Friday 12th August. Available online and at the venues.