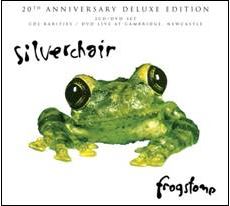 Thanks to our very good friends at Sony Music Australia, we have FIVE copies of deluxe version of the 20th Anniversary Edition of silverchair’s killer album ‘Frogstomp’ to give away to five of our lucky readers. It’s an absolute rocker, we loved it and you can read what we thought about it HERE So if you want win one of the five […]

END_OF_DOCUMENT_TOKEN_TO_BE_REPLACED

Do you have a silverchair story? I do… don’t worry it’ll all be relevant to this review… so in 1994 I was going to school in St Kilda, one of the guys tells us to come to The Espy on Friday as ‘there are these kids that are unbelievable, they’re going to be huge…’ we look at him like ‘ok…’ […]

END_OF_DOCUMENT_TOKEN_TO_BE_REPLACED

March 13, 2015 by MTRBWY in Music News Comments are Disabled

Sony Music Entertainment Australia is proud to announce the release of the 20th Anniversary remastered edition of silverchair’s history making debut album frogstomp. The album will be re-released as the following packages – as a single CD, a 2CD/DVD deluxe set, 180 gram yellow vinyl as well as digitally on Friday March 27th 2015, which is exactly 20 years to […]