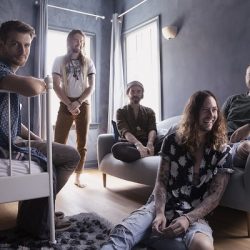 Hands Like Houses have revealed “Monster” – the second single from their new album -Anon. set for release on October 12 via UNFD. Alongside the single reveal, Hands Like Houses have announced an exclusive run of album intimate launch shows during release week in Melbourne, Sydney and Brisbane. Built around the line “I can feel it coming alive”, “Monster” is about running from yourself […]

END_OF_DOCUMENT_TOKEN_TO_BE_REPLACED

July 26, 2018 by MTRBWY in Music News Comments are Disabled

Riding high from their most successful two-and-a-half years together yet – which included an ARIA Top 10 debut and three back-to-back sold out headline tours of Australia – Hands Like Houses return with -Anon., set for release on October 12 via UNFD. Their most determined release yet, the first taste of the album comes via the track “Overthinking”. Filmed in Los Feliz, Los […]