John ‘JD’ Cronise of The Sword 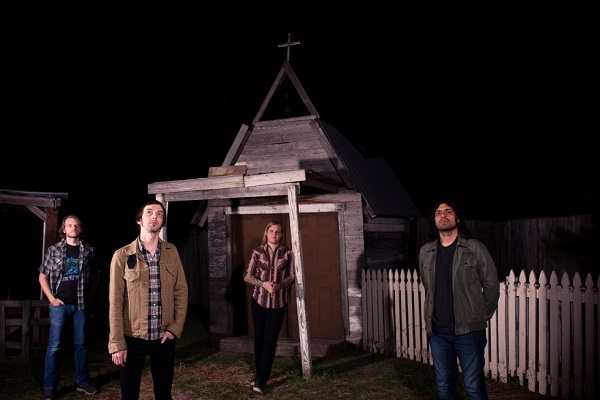 “…we remember that we’re doing it for ourselves and not to put money in other people’s pockets or to please other people. If they were paying us a lot better we might do it for the machine, but at our level it’s strictly for the love of music.”

From release: The Sword’s impact continues to expand. 2012’s Apocryphon debuted at #17 on the Billboard Top 200, marking their highest entry on the chart. Since first emerging with 2006’s Age of Winters, the group has been extolled by everyone from Rolling Stone and The Washington Post to Revolver and Decibel. Metallica personally chose them as support for a global tour, and they’ve earned high-profile syncs in movies including Jennifer’s Body and Jonas Åkerlund’s Horsemen. However, High Country is the band’s biggest, boldest, and brightest frontier.

While at home, we spoke to JD of The Sword about the band’s new album ‘High Country’, its concept, the vinyl resurgence, touring Australia, career highlights, and much more…

This will be your fifth album, with each release do go in with an idea of what you want to create or does it all come together in the studio?
We go in with a vague idea but it always ends up a little different than you planned, so it helps not to try to over plan because it’s not gonna ever go exactly according to that. So it always just ends up being its own thing. We definitely had ideas about stuff before we went in, but this one we kind of improvised and played with stuff and experimented a little bit more in the studio with this one than we have with others, so maybe it turned out even a little more differently than we had originally thought.

I love the vibe of the title but what does High Country represent to you personally?
Well it’s kind of a dualistic meaning of the literal meaning of mountains, high places, there’s various references to mountains and things in the lyrics, then the symbolism between high country and mountains in general being places to go to seek wisdom, seek enlightenment, to be one with nature and sort of commune with the gods or whatever.

In terms of the songs, was there an inspiration or concept you were aiming for?
Not really, I think they all kind of complement each other in a  way or definitely have some themes that are present in more than one song, I think that was just cause they were all written around the same time, but there was no conscious thought in trying to make any sort of certain statement like that.

Five albums in now, do you find it gets easier creating new music each time as your experience grows when making each record?
No it definitely doesn’t get any easier *laughs* if anything it gets a little more difficult because there’s a lot of other external things that you have to ignore, the further along in a career that you get there’s fans and people you work with and things like that, and record companies and that sort of thing. When you’re starting out there’s no one expecting you to make any music, no one cares if you do or not, it’s up to you, you make the music because you want to make a statement or you want to express yourself in that way, so it becomes a little different when all of a sudden people are expecting you to do it. So for us it’s always the challenge of that doesn’t exist *laughs* and we remember that we’re doing it for ourselves and not to put money in other people’s pockets or to please other people. If they were paying us a lot better we might do it for the machine, but at our level it’s strictly for the love of music.

You’re also releasing it as a special two LP vinyl for us down here, and vinyl has had a real resurgence, and this feels like an album that should be played on vinyl, what are your thoughts on the current vinyl revolution?
I think it’s pretty cool, it’s something I never really expected. I thought when vinyl started to kind of decline in the late 90’s that was going to be it, but it’s interesting to me that it’s come back, I think it speaks to some peoples need to still have a physical object in their hands rather than just having it online, on their phone or on their computer or whatever. To me it’s interesting, I’ve heard different things, I wonder if it’s more people of my generation and older people that are kind of missing going to stores and buying records if they’re the ones doing it or if there’s any young people getting into records hopefully there are… but it’s definitely cool because I like records. The artwork is a big thing for me, it’s big, it’s right in front of you, you can hold it in your hands and stare at it while you’re listening to the record.

I saw you quoted saying you just want to put smiles on people’s faces… My theory is for people to enjoy music the artist needs to also, so what do you enjoy the most about being in The Sword?
I just enjoy playing rock music, really when it comes down to it, it’s that hour and a half on stage is what makes it worth it or at least hopefully… that’s what it comes down to.

You’ve been a part of The Sword since 2003, in the twelve years since beginning what for you has been the biggest realization about making music and being in a band that you didn’t think would be a part of it all when you began?
Hmm that’s a good question… Hmm… kind of like I was saying before just when it goes from your hobby to your career to your job, it would be easy to fall prey to those outside pressures I was talking about and especially in this day and age when it’s rough out there in the music biz *laughs* and when people attract some fans and get a little bit of a buzz going they don’t want to ruin that, they don’t like to rock the boat a couple of times and people can be almost maybe a little more conservative these days musically with not really wanting to alienate fans, and you don’t even think about that sort of thing when you’re starting out that you could get to the point where you’re gonna have to decide whether or not you need to make an artistic decision that might piss off these people that liked you. Just things like that and like I said, when it becomes your job and in order to make it good and make it pure you have to find a way to really dig down to that core of why you started doing it in the first place and try to push out all the other BS.

You’ve been to Australia before, when do you think we can expect to see you back?
Hopefully early next year sometime, we’re working on putting together a tour for maybe February or March, sometime in there, don’t quote me on that but sometime in early 2016 we’re hoping to get down.

In terms of career highlights thus far, is there one that stands out for you as your can’t be beaten moment?
Hmm… can’t be beaten… *laughs* that is a good question, you know there’s lots of them… for me one of the coolest things is we played a festival in Spain a couple of years ago and it was this really cool festival called Azkena and The Black Crowes played and it turned it was going to be one of the last shows they played as they broke up a few months later, and they’re one of my favourite bands of all time and it turns out that they had heard of us and were into The Sword and I got to meet Chris Robinson and talk to him for a little bit, I was walking by and he actually said “Hey man, are you the guy from The Sword, come here I want to talk to you…” and that… I’ve met some pretty famous dudes here and there *laughs* but for me personally that was a moment that I will not soon forget, like ‘whoa, Chris Robinson wants to talk to me’ so that was pretty insane.

I wanted to ask about playing with Metallica, what was that experience like?
Oh it was amazing *laughs* not to slight any of those dudes, that was almost more surreal in a way, like The Black Crowes is one thing like when I was growing up I was the only one of my friends that liked The Black Crowes, no one else was into that, it was like my special thing. Metallica they’re not just mine, everybody likes Metallica, not that I’m the only Black Crowes fan but when I was growing up there were tonnes of kids around wearing Metallica shirts even though I dug them too, they weren’t my special band. Still, meeting those dudes is surreal, even now when I see them or see pictures of them on the internet it’s like yeah, I kinda know those guys, it’s weird *laughs*.

Lastly with the year on the downward slope, let’s get you to predict the remainder of it, so finish this sentence for me, by the end of 2015 The Sword will…
Have been on tour since our album came out pretty much, that’s our plans for the rest of the year.