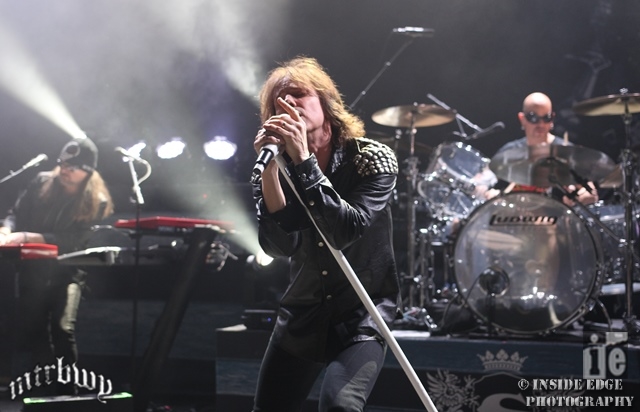 This was the second of two nights in London, and the last night of the 15 date UK tour for this cracking double bill, and on early arrival at the venue, there were already two long lines of people queuing for the doors – 40 minutes prior to them opening.

Despite the competition from the 6 nations rugby, this was a second sell-out night, and the venue was pretty much crammed before The Amorettes hit the stage at the early time of 6.50pm. A three-piece from Scotland, featuring Gill Montgomery on guitar and vocals, and Heather & Hannah McKay as the rhythm-section, the girls belted out a 30 minute set of high-octane rock, clearly influenced by the likes of AC/DC and Airbourne, taking me back to seeing Girlschool in the early 1980s – from their new album “GAME ON” being released in the UK this month. Musically solid and with a huge guitar sound, the band will benefit from touring with such pro bands in developing their stagecraft, but certainly won over a large proportion of the crowd, closing with a singalong of “HARD & HEAVY”. http://www.theamorettes.co.uk/

Both of the main acts were doing full headline sets, so the stage was cleared for the BSR gear and a new backdrop of the latest album cover for “KILLER INSTINCT”. The current band features the core threesome of the Thin Lizzy band which toured Australia in 2013 with Kiss / Motley Crue – Scott Gorham, Ricky Warwick and Damon Johnson – with a new backing duo of Jimmy De Grasso (Drums ) and Robbie Crane (Bass), and now that there is a second BSR album, there is a little less need to rely on the classic Lizzy material to support the set – although you can’t avoid it. Ricky Warwick remains a terrific frontman for BSR, and also provides the Irish brogue for the Lizzy songs. Damon Johnson is a fantastic guitarist, and more than holds his own with the Brian Robertson / John Sykes foil to the so-cool Scott G whose understated solos are just a delight to watch – even when his gear issues threatened to wreck the set.

I really like the BSR originals, and set-opener “BOUND FOR GLORY” is a cracker – followed up with “JAILBREAK”, and then “KINGDOM OF THE LOST” and new song “CHARLIE I GOTTA GO”. “HOODOO VOODOO” and “BLOODSHOT” from the BSR album bracket a storming “ARE YOU READY” before another newie “THROUGH THE MOTIONS”. “HEY JUDAS” from the first album works so much better live and this really lifted the crowd into the massive new track “SEX, GUNS & GASOLINE” before the set closed off with 4 Lizzy standards including the wonderful “EMERALD”, and new song “FINEST HOUR” which I thought could be classed as BSR’s version of ROSALIE….just before they played the Lizzy classic. New album title track “KILLER INSTINCT” was the set-closer, and then the green lights shone to celebrate the Irish rugby win, before a raucous reception for a storming “WHISKY IN THE JAR” brought the BSR show to close.

A further gear clearance revealed the chess-set inspired War of Kings backdrop and riser / backline – before the intro-tape heralded a white-light drenched stage for the new album title track, followed by “HOLE IN MY POCKET” and “LAST LOOK AT EDEN” – with Joey Tempest still seeming to be the 20-year old frontman we all remember from seeing The Final Countdown on TV for the first time. Energy and enthusiasm to burn, he runs through what he called “his moves” while still showing what a powerful voice he has. He noted that his 7yo son thinks some of the moves are a little embarrassing, which bassist John Leven said that the rest of the band agreed with too!

It is so obvious just how together this band is after so many years – with John Norum holding the sole guitar role, supported by Mic Michaeli on keys – with the signature Europe sound coming to the fore with “ROCK THE NIGHT”, which raised the roof of the Empire, followed closely by “SUPERSTITIOUS”. John Leven and Ian Haugland provide a straightforward and solid backing to the melodies, with occasional flashes of brilliance throughout the set. Joey Tempest is just a livewire onstage, and really knows how to work the crowd – clearly not taking himself too seriously, and having a blast.

“WASTED TIME” was tonight’s selection from the Stormwind album, followed by the classic ballad “CARRIE”, then two new songs, “NO STONE UNTURNED”, and a slightly more industrial stripped-down “PRAISE YOU” which worked well live. One of my favourites, “SEVEN DOORS HOTEL” kicked off the run for home, with “FIREBOX” then “LET THE GOOD TIMES ROCK” before the set closed with a mammoth “CHEROKEE”, another from the new album – “DAYS OF ROCK AND ROLL”, and the inevitable “FINAL COUNTDOWN”.

No partisan crowd here – the whole audience were equally supportive of the two headline bands – just showing that an innovative double-header bill of two such well-loved bands / musicians can really work on a national tour.

Supported By: The Amorettes

Bound for Glory
Jailbreak
Kingdom of the Lost
Charlie I Gotta Go
Hoodoo Voodoo
Soldierstown
Are You Ready
Bloodshot
The Boys Are Back in Town
Sex, Guns & Gasoline
Through the Motions
Hey Judas
Emerald
Finest Hour
Rosalie
The Killer Instinct
Whiskey in the Jar