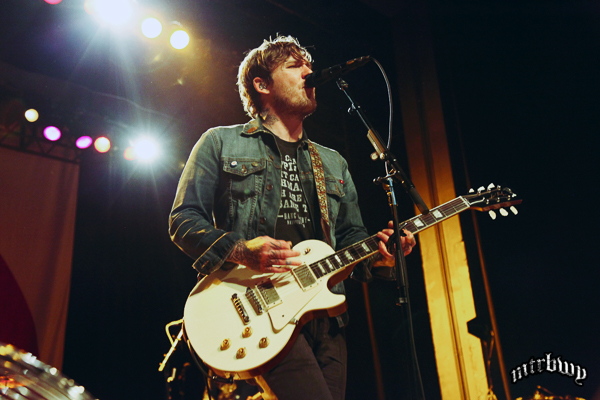 Now, If there’s a band that I’ve really attached to over the last few years it’s The Gaslight Anthem, particularly when an album like ‘Handwritten’ was my album of the year in 2012, so seeing them live only for the second time tonight is something I’ve been looking forward to, so let’s see how the last few years has been for these boys from New Jersey… in a little bit.

Chris Farren from his band Fake Problems but here solo tonight takes on the support duties, just one man and a guitar which is always a tough sell for a rock crowd, but… ‘Mr Rock and Roll’ starts us off and people are intrigued, and then with his next track he gets into it and shows us some killer vocal range and passion, he’s got it down. On his first time here he’s winning the ever growing crowd over with each song, and what I like is as he introduced a ‘new song’ he prefaced that with ‘well, actually all of these will be new to you’ touche. With each song I’m loving his material more and more, the songs are executed well and played with the feeling they would’ve been written with. Lyrically I love what he does in his tunes and I need to now find out a lot more about Chris Farren. Watch this space.

It’s such an early start tonight, so as the crowd starts to trickle in and fill up the Enmore just after 8pm ready for the main act, I do have to give special mention to the guy in the RATT shirt! Winner!

Here they are! Back in Australia in support of their new album ‘Get Hurt’ the band opens with always amazing ‘The ‘59 Sound’ and what a way to kick off this set. If you ever wanted to pump up a crowd from the start, this is how you do it. “You ain’t supposed to die on a Saturday night” indeed! Whoa, let’s just not waste any time at all, ‘Handwritten’ is greeted with rousing applause and tonight the band sounds great, Fallon nails this one, his vocal raspiness makes these songs and this one in particular is a stand out. ‘Old White Lincoln’ is an oldie but such a goodie and man, this band is so tight, as they nail ‘Spirit of Jazz’ which fits right into the set and gets the crowd clapping along and as the song finishes and the band the stops for the first time and Brian has a chat to the crowd about his birthday that he promises is on the 28th of January after some confusion about that on the ‘internet’, he introduces ‘1000 years’ aka ‘please stop arguing with me about my birthday’ and the first to appear from ‘Get Hurt’ and slips right into the set and to me is already a perfect Gaslight Anthem song, and it seems many agree with me as I see fists pumping back towards the stage.

‘High Lonesome’ rocks it out, and what I love so much about this band is the way they arrange songs. The guitars are perfect, the balance of melody and harmonies are outstanding, plus this song rules for the Springsteen homage. They belt out corker after corker and can do no wrong tonight, Blue Dahlia’ is great with its big build allowing the band to jam the outro and nail it. While ‘Old Haunts’ allows Benny’s drums to shine through on this one, and what a great drum sound tonight.

Another amazing interlude this time featuring Chris Farren and all about the Internet, Ben & Jerry’s Ice cream and using phones at concerts, which Brian is ok with by the way in case you were interested. ‘Stay Lucky’ brings the music back and ‘Here Comes My Man’ does it one step better and they love that one here tonight. ‘I’da Called You Woody, Joe’ kills it, and now for the first time tonight the set slows down… This is a big ballad and it’s ‘Sweet Morphine’ which slips perfectly into what’s already been a high tempo set, as it includes a nice little RHCP ‘Scar Tissue’ thrown it to play it out. OK, I loved this bit, they awesomely got a ten year old kid out of the crowd to play drums which was pretty cool, much love from the band and the crowd as he was high fived through the crowd as he made his way back to his spot. ‘Great Expectations’ is one they all love, a standard in a Gaslight set and one I don’t see ever leaving it. Yes! ‘Mullholland Drive’ an absolute stand out tonight and didn’t everyone want this one!! There is so much passion in this song and it comes through tenfold in a live environment. The build up to the ‘will you miss me when I’m gone’ out of the solo is spectacular. ‘The Patient Ferris Wheel’ is one catchy little ditty and wow, that one went down so well with close to the biggest applause of the night yet.

Back to a slower one, this one a B-side called ‘She Loves You’ and it seems not many know this one as I can hear everyone just chatting away, hate that, and even Brian acknowledged that, but he said he loved the song, so there. Ahhh there we go, ’45’ is here and that shuts the talkers up, this is another song built for the stage and as the crowd yells the chorus back to the stage, you feel like many had been waiting to hear this one. ‘Wherefore Art Thou, Elvis?’ was a cool addition to the set eve if they did completely change the vibe of the song from the original, then volume up, and in a big way with ‘1930’ then back to Handwritten with ‘Keepsake’ which was unexpected but was cool to hear. Heck, I would’ve been happy if they just played Handwritten start to finish but hey, I’ll take as many tracks as we can get from it.

‘I Coulda Been A Contender’ followed by another fun chat interlude as Chris Farren returns to the stage to sing one with the band, the slow paced ‘Songs For Teenagers’ and it was actually quite a cool track. ‘Blue Jeans and White T-shirts’ keeps the tempo down but it’s a song that is accepted here tonight. Gotta love ‘The Backseat’ which is how they closed out the set last tour, and here again tonight and it sounds just as good. With that, the house lights come up, goodnight Springton, there will be no encore.

Awesome, tight show tonight! Only one song from their new album was a lot confusing, but hey, with a set like this, I’m in no way complaining! Gaslight Anthem? More like Gaslight Awesome.

Catch The Gaslight Anthem on their remaining Australian tour dates: