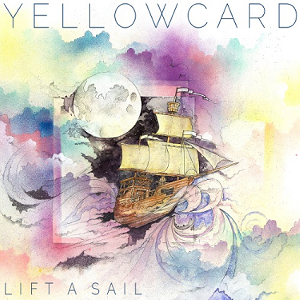 From the second this album begins simply with a violin, it’s a somber beginning, a mood is set with a two minute introduction called ‘Convocation’ and I listen and get taken away, taken away to a place that just feels nice, it gives me the feeling that Yellowcard have grown up, and I can’t wait to hear what this, their ninth album has in store for us. ‘Transmission Home’ takes the somber away and turns the guitars up loud, they crunch through this track with a perfect blend of harmonies, hooks and overall stellar production, what I mean is if Yellowcard wanted to show people what they’re doing now, this is it. A perfect song to lead this album and a perfect song to keep me wanting to see what’s next, and next is ‘Crash The Gates’ that keeps it rockin’ and what I’m enjoying so far about this album is the song arrangements, they have allowed themselves to drop in some slower parts, some minor instrumental parts and while different they blend and make these songs what they are, there has been this in both songs so far and I’m sure more to come. Now we have ‘Make Me So’ which brings me back to an old favourite of mine, you know you’re onto a good song when you find your foot tapping along to the chorus of a song without even realizing, and ta da, this one did just that to me and we’ve just found a song to soon be cemented in a live set and should stay there, that was a ripper.

Oh this is a little different, the acoustic and drum machine comes out for ‘One Bedroom’ which was the first single lifted for this release, wise choice? Not so sure, but while it is a good song, it is a real departure from the Yellowcard many know and as soon as I say that BOOM it turns into a balls out rocker that I feel may have blown part of my speakers… the bill is in the mail Ryan… but seriously, out of nowhere comes this rock onslaught that just impressed me a million times more as it faded out, man I love fade outs, I’m so old school sometimes… ‘Fragile and Dear’ is a killer track both musically and lyrically, again, they’re trying something different here too, and I kinda like it when they change it up in the verses and belt out the chorus, it’s also our first sign of a violin solo which I love about this band, always dug that about them and glad they haven’t completely pushed it away. As the album continues with ‘Illuminate’ I’m happy as this is the rockiest opener, killer riff and is so far my stand out on the album, I just love the groove this one hits and the slower breakdown once again in the middle until the end works, and so this far in I’m really happy with what the band are doing. I love growth in a band, I like evolution to an extent, not when a metal band goes mainstream jazz or something like that, but you know what I mean… bands are allowed to grow, to change and to experiment and with this album I can feel Yellowcard doing just that and I for one welcome it.

Sometimes I worry when songs are named after places… this one, ‘Madrid’ didn’t give me enough time to worry at only two minutes long, it was a nice little bridge, a throw in, but with some great lyrics, but forgetful as soon as ‘The Deepest Well’ kicks in and takes the violin by the bow and with Matty Mullins of Memphis May Fire as a guest here, they deliver probably the catchiest song and dare I say best so far on the album. I truly enjoy an album that has strong songs so late in as many have been known to peter off as we get to the end, but alas, what a chorus here!

OK, new paragraph, always have to do this to discuss a title track. I often find these songs the most intriguing on an album, with questions such as ‘why was this one so good that the album got to be named after it?’ and ‘will it truly impress me?’ and so far, yes. Impressive is a good word for this song, it’s an outstanding middle of the road rocker, not too heavy, not too soft and ooh a guitar solo, nice, but this one truly earned the naming rights to the album, this chorus is destined to be sung back loudly at every Yellowcard gig from now to eternity and ‘I am ready now…’ also destined to be a phrase used by many a fan, well it deserves to be. Title track win!

‘MSK’ makes me think of that bitchin’ cartoon ‘MASK’ from the 80’s but alas not a reworking of that killer theme song that I now have stuck in my head… instead this is an atmospheric truly well written song, shows that growth and evolution I was talking about earlier as this once in terms of song writing is showing how far the band has come and in particular Key as a writer. I like what they’ve done here and as I listen to the musical arrangements here with the violins of many kinds building this song to what it is, there’s no big guitars, no drums, no need…

The drums and guitars return from their scheduled coffee break just in time to make ‘My Mountain’ a rock song and ooh, an unexpected chord progression in the chorus threw me for a second, but I do like the rock that that ‘My Mountain’ brings, pun somewhat intended, but amazingly we are at the end of the album, man that’s testament to a good release when the album is so smoothly done and well put together that time didn’t even matter and was in no way a chore to listen to, so with only one to go it’s ‘California’. A single piano takes the musical lead, with this ballad a truly well written and recorded song, and it makes me want to be back in California, and being into Yellowcard for some time now, I still remember the time I was there in 2007 and found an ‘Ocean Ave’ and yeah I was excited, hey, it was a novelty, so wanting to be back in California now because of this song is a good thing. Going out this way was spectacular, perfectly bookended.

With the band returning to Australia in July of 2015, I almost feel sad that we have to wait so long to hear these songs performed live, as I for one cannot wait. So raise a glass to ‘Lift a Sail’ and listen and enjoy to a really cool mature album. Thank you Yellowcard, you did good, real good.