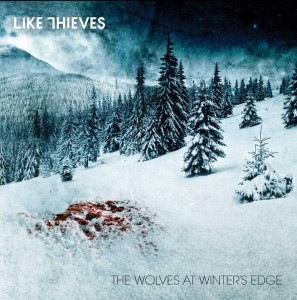 It’s always hard when you have a front man that you are well aware of his previous works… so what I need to not do is use this review as a comparison between what vocalist Clint has done before and purely base it on this new band, this new project, truly as anyone should anyway, so nothing to worry about from me, and here we have a new band called ‘Like Thieves’ and their debut EP ‘The Wolves At Winter’s Edge’…

Opener ‘Killing Reason’ is a melodic rocker that musically is progressive, complex and layered with some great guitar tones and vocally shows Clint’s range with some perfect lower parts throughout, in particular in the middle section that breaks the song down. If this is what I have in store for the next four tracks, then strap me in as I’m not going anywhere. ‘Echoes of Time’ is a slower paced track but lyrically is strong and believable as a guitar riff is played throughout the song as an underlying theme it suits this song. A slight change here with the title track that brings the tempo back up and has somewhat of an epic almost Thirty Seconds To Mars / A Perfect Circle style vibe but heavier, in saying that it is perfectly placed on the EP in the middle as it is a balance here. Once again the song breaks down to a slower mid-section only to build and this build showcases Clint’s vocal talents once again, man that cat can sing.

Oh yeah, I like this one already… ‘In My Arms Till The End’… this one is my favourite on the EP, musically this is awesome, so much happening here and the heavy verses that drop to a more subdued chorus is the sign of a great arrangement and this just has an almost industrial feel to the guitar tone and it suits this song and is a winner. With all songs clocking over four minutes, the closer ‘Alibi’ barely hits three and in a complete 180 from the previous four tracks, this acoustic driven story is a beautiful song, but also not what I was expecting after what I had just heard. This is a song that a band like The Tea Party would love to write, it has that feel to it and although different, it’s actually a damn good song, and shows me that this isn’t just a big new rock band that can write a rocker, but there is a side to this band that may define them in years to come.

I truly enjoyed this EP from Like Thieves, in fact my only real downfall was that it was only an EP as I need to hear more from this band, stat! Obviously if you are aware of Clint’s voice, well you’ll love this, but I have to say that the band themselves, musically are a talent and nail it, this EP is killer and well worth a listen.

Track Listing:
Killing Reason
Echoes of Time
The Wolves at Winter’s Edge
In My Arms Till The End
Alibi