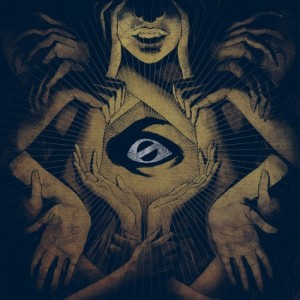 I always get intrigued when I have an album to review and I find out that the band has been around for quite some time (over ten years in fact) and I’ve never heard of them. Shame on me, shame indeed. Although in reading up on this new album by Misery Signals, I find that it’s been five years since their last album and this one was in fact a completely fan funded effort. I truly love the concept of the pledge music, the pozibles and the every other outlet that allows bands to continue to create music and do it because the fans want it, in the case of Misery Signals, it was indiegogo that got this album to us today. So after all that ramble at the start, what I’m trying to say is, that when this much effort is put in by the fans, you’d like to hope that it’s returned by the band…

So, what do we have here with ‘Absent Light’?

I’m going to say, a mix of hardcore, progressive, metalcore, with melodic tendancies… or Harprogmetalicore as I’m now calling it, PS: ‘Harprogmeatlicore’ is copyright TM Troy Culpan 2013… yeah, that’s what I get from it, and what I truly do enjoy is an album that I can’t tap my foot along to due to the curve ball time signature changes that find their way into some songs. Take ‘Reborn (An Execution)’ which is 3 minutes and 44 seconds of perfect arrangements, even incorporating strings throughout, but it is a monster of a song that if the rest of the album is as good as this track, well then, bring that on. Some of these songs are short, sharp and deliver a punch that Rocky would be proud of, and in terms of this ‘genre’ this is actually pretty damn impressive.

The album continues on in the Harprogmetalicore vein and just honestly is kicking ass.  The quiet musical interlude between ‘Shadows and Depth’ is soothing and here’s me expecting a nice flow into the ‘Lost Relics’ oh but instead, I got punched the face with a wall of growls and if I wasn’t awake before, well I am now. The more I listen, the more I dig this album, as I can hear all the musical elements within what they have done, numerous parts, layers and it’s so clean, the playing is top notch here. Producers Greg Thomas and Ryan Morgan both members of the band have done a killer job here with ‘Absent Light’ and as I mentioned at the start, well it’s fair to say that they’ve done the fans proud.

The album finishes more intense than a camp site with songs like ‘The Shallows’ which actually is probably now my favourite on the album and this late in too, there is just something about the tone and groove on this one that stands out. ‘Ursa Minor’ turns it up even more, but I’m pleasantly surprised by the closing track ‘Everything Will Rust’ where we get a taste of clean vocals for the first time, in fact I had to check that the same album was still on. Oh wait, there we go, the growls are back, phew, I was worried for a second… the album goes out as it began, quietly, tranquil and has bookended what was a kick ass album.

Overall, this was a solid 43 minutes of music that was worth my time checking out, and if you want to check out something new, interesting and the first in the genre of Harprogmetalicore, well then Misery Signals new album ‘Absent Light’ is where you should head to.

For fans of: Hardcore / Metal