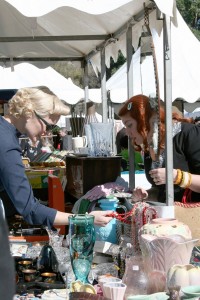 Hell City Glamours – After 7 years treading the sticky boards of Australia’s stages and venues, ranging from the smallest pubs to entertainment centres, Sydney’s infamous Hell City Glamours are heading to the Sydney Rock ‘n Roll & Alternative Market. Bringing the DIY ethic and sound of their punk rock youth combined with a strong love of solid blues rock bands from the 60s through to now they have a sound which stands out from their influences without hurting anyone’s feelings either.

Ezra Lee & the Steel City Band – Ezra Lee is the King of Honky Tonk, this year he played a set of original rockin’ tunes supporting none Jerry Lee Lewis at the 14th Annual Viva Las Vegas Rockabilly Weekender. He also supported Bill Haley’s Comets and Sleepy La Beef at Screamin’ Fest in Spain. Ezra Lee is a singer and piano player with a unique style that can bring down the house. His album ‘You Can’t Stop a Freight Train’ was released on Preston Records in 2009. Ezra is a member of the Ultimate Rock ‘n’ Roll Jam Session (playing to sold out audiences around Australia). Ezra is backed by: Johnny Green and Grunter from Johnny Green’s Blues Cowboys (the band that Ezra started in), Hank Green, a 14 year old wiz on guitar, blues harp and slide guitar and Johnny Grey (Australian blues legend from Junior & the Gold Tops and Rockinitis).

Chucks Wagon – Are inspired by the Outlaws of Texas Country Music. Formed in 2006, Chucks Wagon have released a “Bootleg” e.p in 2006, followed by their Debut Album in August 2007, a debut video single “Black Road” in 2008 , as well as “Live in Austin Texas”. Currently they are promoting the release of their second studio album, “Lipstick and Sin”. Chucks Wagon tour nationally and internationally, and will be returning from another USA tour immediately prior to the market

Chickenstones – Stepping straight out of a sinister B grade western Chickenstones present their brand of horror country, swamp & rock ‘n roll. If you’ve lost at cards, cheated on your partner, drank like a mother, or been chased out of town they will offer you no redemption. Dance while they shoot at your feet.

DJ – MC Double act Wolfman Dan and the Rockabilly Rhino, presenters of Liquored up and Lacquered Down (99.3fm)  and FBi radio’s Jack Sh*t will keep you entertained between sets.

Catch the 422 bus from Newtown Station, or take a 10 minute stroll from Wolli Creek or Tempe Train Stations.