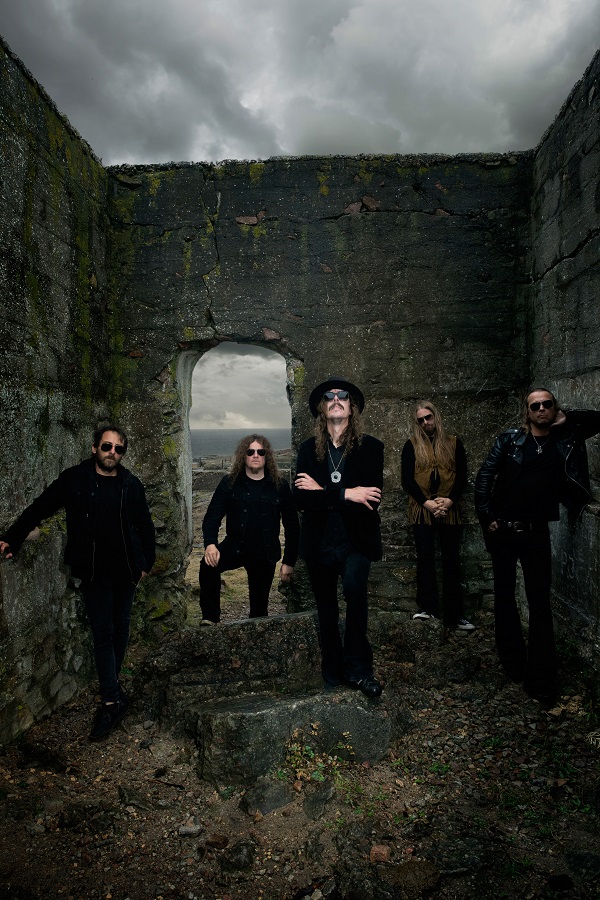 From Release: Sweden’s OPETH are preparing to release their most important record to date with »In Cauda Venenum«. Certainly, fans and critics will have their opinion, but few records in the Swedes’ oeuvre are as engaging, delicate, panoramic, intense, and musical as OPETH’s lucky thirteenth. OPETH’s usual five-star musicianship, and lyrics entirely in Swedish, »In Cauda Venenum« raises the bar markedly. While a record in Swedish is a first—there’s also an English version—for frontman and founding member Mikael Åkerfeldt, the 10 songs on offer feel and sound completely natural. As if years of listening to and being a fan of Swedish rock and hard rock has paid off. In a way, Opeth have come home.

We skyped Fredrik while it was nice and early in Stockholm to catch up and talk about Opeth’s new album ‘In Cauda Venenum’, its creation, guitars, recording the album in two languages, their upcoming Australian tour, and more…

It’s been two and a half years since we last chatted so let’s catch up, how have the last two and a half years been for you?
It’s been good, I mean we started touring again in May this year and before that we didn’t tour until November the year before so we almost had a year off of touring, but of course we did the album and put a lot of work into that and now we’re starting to get the wheels rolling again and preparing for the album release and tour and everything, doing lots of interviews and thinking about the live set and what we’re going to do for different production and put some effort into that. So it’s good.

So let’s talk about the new album ‘In Cauda Venenum’, what if anything did you set out to do differently on this record compared to previous releases?
Well first thing we did was we actually rehearsed once in a while before we went into the studio *laughs* usually everybody learns their parts at their home, this time we thought it would be a good idea to be able to play the song as we play them live. We didn’t rehearse the vocals though but all the music and I think that was very important for this album because there was no question marks for anybody when we entered the studio, everybody knew their parts and we could spend a lot of time with choosing the right instruments, the right bass, or guitar, amp and cymbal even *laughs* so we really put a lot of time in testing different sounds because every song has a frame of frequencies you can put in it and it works differently in each song like just for the basis.

In terms of your playing, how did you approach this album?
First of all I had to learn the songs, apparently, and then I’m kind of in charge of all the guitar tones, so for this album I’ve been working with a local amp builder called Olsson amps, and we’ve been working on the gain structure for two years with a smaller amp and he said “I can make you a 100 watt amp if we go into the studio” oh yeah sure, he did that, and we compared to lots of other amps and it actually won the contest, so that’s what me and Mikael is using on the album it’s only one of those amps. Then apparently Carcass nicked it and used it on their latest album as well. So that was pretty cool to have only one amp that’s only one of on the album. Otherwise preparing for the solos it’s a lot of time, I usually improvise a lot of solos in the demo studio with Mikael and then I have to relearn those which can be difficult sometimes, and I try to pimp them up a little bit basically.

Oh man and a song like ‘Continuum’ lets you shred, that stood out for me as a favourite on the record.
Oh thank you so much, I wanted to do a wild type of solo, a crazy one, aggressive.

I love the fact you guys recorded this in Swedish and English, what was the idea behind doing that?
Well really I think the reason is that Mikael wrote the album in Swedish first, so the English version came about in the actual studio recording and he told me it was more difficult to write in Swedish than English actually because he had to make it more intricate, more interesting in a way. So, I think that was a driving force for him that he wrote it in Swedish to finish it off, it became something he could feed off a bit. That was basically the idea. It’s of course good that we released it in English as well first, of course it was always going to be in Swedish that might be shooting yourself in the foot a bit *laughs* it’s cool but some diehard fans enjoy both versions you know.

I found that it almost took on a different feeling when I listened to it in Swedish, almost like a different album even though it’s the same which sounds weird but that’s how it felt.
Yeah I mean some words you have to alternate and it’s different syllables to sing on and all that, of course that affects the actual vocal melody a little bit. I prefer some songs better in English and some songs better in Swedish actually.

Of course you’re also headed back to Australia this December, can you give us an idea on how the shows are going to be structured?
I think we’re gonna play long shows as we usually do. We haven’t figured out the set lists but now we’ve been playing the same stuff for quite some time and we really want to dig out some cool old stuff, and it’s also difficult as you want to fit in as much as possible from all the albums but you also want to play a lot of the new stuff which you haven’t done which is fun. So we’re still figuring that out, we have some ideas of which songs we’re going to do and it’s gonna be interesting, we’re working a bit on the stage set, we’re gonna change things up a little bit like on where everybody’s being placed and stuff like that. So trying to do something different, I don’t know how much production we’ll bring to Australia but as much as possible as course.

An Opeth live show is almost more of an experience than just a live show, and even more so that you’re playing theatres here in Australia just to enhance the environment, how important is this for the live aspect of the band?
I think  it’s very important because that frames the show and when we play bigger cities like in New York or London we always try to play different venues, I mean some cities are smaller and it’s more difficult, but this time around we play one place in Melbourne we haven’t played before which is supposed to be nice, the Palais Theatre, it looks like a lot of theatres, State Theatre in Sydney I don’t know if I’ve been there, so it’s a lot of different ones in Australia so looking forward to it.

Australia has always been such a great territory for Opeth, what do you think it is about the music of Opeth that we just attach to?
I don’t know it’s amazing, it’s always great coming down there and the crowd is amazing. The travel is of course a bit exhausting but it’s all worth it, you know. Maybe the Australians are open-minded when it comes to music because we space out a lot you know and we don’t have the regular arrangement like a pop song *laughs* it drifts away a bit and maybe the Australians are more open to that spaced out stuff which is great.

Over time it can be very easy to say what can change within a band but what for you is the one thing that’s stayed the same about Opeth?
Well, the feeling that you get when you listen to it you never know what you’re gonna expect, that’s one of the things.

Lastly let’s look ahead to the future, finish this sentence for me, in 2020 Opeth wants to…
Tour the world.

Are there big plans already for next year?
Yeah we have some plans, we’re looking at doing some Scandinavian shows at the beginning of the year in January and then looking at North American tour in February and then there’s talk of a South American tour, quite a long one. Then I believe it’s time for the festival season which is always like the main thing with all the festivals in Europe there’s a bunch of them. Then after that we haven’t really talked, but we’ll definitely tour in the Fall as well after next Summer.

So definitely keeping busy with this new record then?
Yeah I think so, I mean we’ve all got kids as well so we try to be away for three weeks and then home for a couple of weeks, we usually do these seven week tours in America but we fortunately enough we can afford not to do it since we did so many of those build up tours and it’s really a bit of a struggle for the families to be away for that long.