California’s greatest export and renowned feminist supporters Steel Panther recently took a break from working with NASA scientists on a multiple orgasm-inducing guitar pedal to record their fifth studio album. The band is excited to announce that their new album Heavy Metal Rules is finished and scheduled for release on Friday September 27th. The album showcases the band’s musical and lyrical growth and is destined to become an instant classic in the band’s impressive catalog.

The philanthropic foursome comprised of Michael Starr on vocals, Satchel on guitars, Lexxi Foxx on bass and Stix Zadinia on drums have created the heavy metal version of a self-help manual and ultimate party album combined. The new album is available for pre-order in various bundle configuration here: https://lnk.to/HeavyMetalRules. 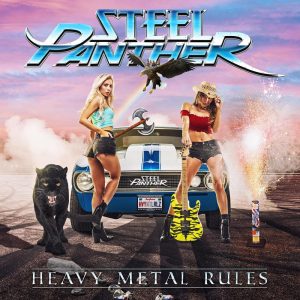 “Heavy Metal Rules is the ultimate party album. Anthem after anthem and hook after hook, the songs will provide the soundtrack to your new bitchin’ heavy metal life. The first single, All I Wanna Do Is Fuck (Myself Tonight), is the ultimate song about self-love and having a positive personal self-image. It is the kind of song you put on to get yourself in the mood whether you’re getting ready to have sex with yourself or 17 girls in a row,” explains Steel Panther.

From the opening track “Zebraman” (which is audio taken from the classic film Heavy Metal Parking Lot) to the emotional album closer “I Ain’t Buying What You’re Selling,” Steel Panther have created 36 minutes of audio eargasms. Songs like “Let’s Get High Tonight,” “Fuck Everybody” and “Gods Of Pussy” are destined to become natural additions to the band’s setlist. “I’m Not Your Bitch” is an anthem for all acknowledged genders and sexual orientations worldwide. The video for the first single “All I Wanna Do Is Fuck (Myself Tonight)” was shot in Las Vegas and features cameos from numerous celebrities from music, comedy, YouTube and more.

For the uninitiated, Steel Panther was formed in 2000 and is comprised of Michael Starr (lead singer), Satchel (guitarist), Lexxi Foxx (bass) and Stix Zadinia (drums). Hailing from Los Angeles, the epicenter for rock n’ roll in all its debauchery and glamour, Steel Panther has established themselves as the world’s premier party band, melding hard rock virtuosity with parody and criminally good looks. Steel Panther is a global phenomenon with four full-length albums, touring across the world, platinum-level You Tube status and high-profile television appearances such as Jimmy Kimmel Live, Larry King Now, and FOX NFL Sunday.

Steel Panther’s fifth studio album will be unleashed into the world on Friday September 27 and can be pre-ordered at https://lnk.to/HeavyMetalRules. Single “All I Wanna do is Fuck (Myself Tonight)” is out now, as is the clip.