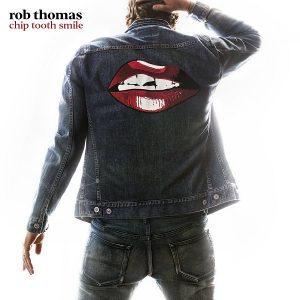 I first heard Rob Thomas’ voice in 1996 when I heard a song called ‘Long Day’ on the radio by a band I’d never heard of. From that day I was hooked. Saw Matchbox Twenty play in Australia on their first promo tour the following year with around 200 people just before they blew up to become one of the biggest bands in the world. I’ve never missed them since and now here we are 23 years later and that voice I’ve loved for that entire duration is releasing his 4th solo album ‘chip tooth smile’. As a fan I’m truly excited to see what he’s done this time around.

The album opens with the lead single ‘One Less Day (Dying Young)’ and this driving beat is a huge hook in this song. You find yourself in the rhythm of it and you’re hooked. Rob Thomas who enlisted musical genius and producer extraordinaire Butch Walker on this album you can hear the influence immediately and throughout. The vibe of the song and the almost Celtic rhythm later just make this an instant fave. What a great start. Now… ‘Timeless’ let’s just talk about this song and the way this has been written, full of throwbacks to the music of old and cleverly put together into a song with a chorus with that ringing guitar and a nice sing along part is just excellent song structure. I won’t mention the specifics but the ‘Phil fill’ is outstanding. I can’t get enough of this song. It just takes me back. ‘Can’t Help Me Now’ starts off as a slower track with a piano and percussion but feels the most Matchbox of the tracks so far but you can hear how much Rob has evolved and this song is mature and musically there’s lots of layers making it full yet not overpowered plus a perfectly gated ending. ‘Funny’ is anything but, it’s a song that I can hear as a single and becoming a favourite as lyrically it’s a great story to follow and with a middle 8 I’m happy. Again, the arrangements of these tunes are perfect. Rob has built his career over twenty some years and has the ability to write and make these songs just come out in his own way.

‘I Love It’ is different, much different to the earlier tracks, but this party track will be fun up on the stage. I see balloons being kicked around. ‘The Man Who Brings The Water’ completely flips things musically with acoustic guitars, slide guitars, and a nice buffer between tracks as ‘We Were Beautiful’ is different once again but this one is actually close to my favourite on the album. Just has a real great vibe and presence to it. ‘It’s Only Love’ starts as a piano ballad and if there’s one thing Rob has perfected its piano ballads; this one is no different. Plus, any song that has strings I’m a sucker for. That truly is a great song though. ‘Early In The Morning’ has a real 80’s vibe to it for me, the production, the way it just drives along and sounds like it could’ve been on ‘Mad Season’ and that’s a good thing. ‘The Worst In Me’ brings that upbeat sound back and some excellent things going on musically here, so many things in the layers and it makes it so happy. The layers stop in a great build after the middle 8 and then back to close out that fun little ditty. ‘Tomorrow’ damn, this is my jam. I can’t explain the atmospheric feel this one throws at you but that just may be my favourite on the album. I guess it just connected. Man, I love music for that reason. The album closes with an acoustic tune called ‘Breathe Out’ and its a perfect way to finish this release. It’s a calming end to a musical rollercoaster.

I love the diversity musically on this album, it bounces around and is yet so balanced and is never anything other than Rob Thomas. He’s been a stalwart of the industry now for over two decades and watching his talent grow, evolve, and shine over that time has been a pleasure. ‘Chip Tooth Smile’ takes you on a musical journey and one that you should be happy to head out on.

Track Listing:
One Less Day (Dying Young)
Timeless
Can’t Help Me Now
Funny
I Love It
The Man to Hold the Water
We Were Beautiful
It’s Only Love
Early in the Morning
The Worst in Me
Tomorrow
Breathe Out