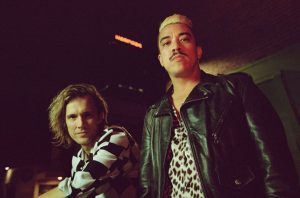 With one foot dragging through the hazy past and the other dangling over the precipice of bad decisions, Polish Club welcomes you to their second album, Iguana. The long-awaited follow-up to their dashing debut arrives June 7, armed with some surprisingly different sonic weaponry.  To commemorate,  Polish Club will tour the nation on a series of capital city and regional dates this June and July.

Named in part for the infamous Kings Cross bar, where the only guaranteed upside was ending your night facedown, the Sydney duo’s hard-won sophomore suite boasts a more expansive, adventurous sound already showcased on lead singles Clarity and We Don’t Care.

“Having been in this band for five years, I think there’s less time for us to faff about. That’s why we put heaps of pressure on evolving the sound; we haven’t got time to bang out three similar albums,” says drummer John-Henry. “It’s the tightrope of doing what you do best and what attracted people to you in the first place, but expanding it and not rehashing old habits,” adds singer/guitarist Novak.

With sold-out national tours, a triple j Hottest 100 single (Clarity, #76) and a blossoming European fanbase, Polish Club had a banner year in 2018. So it stands to reason that they’d do a number on themselves, pushing their band to breaking point on a record that wrangles their expansive influences and crunches them down through sophisticated slabs of sound. “I never understood why bands struggle with second albums,” admits John-Henry. “But now I totally get it.”

This endurance test is echoed across the record’s searing 12 tracks, which once again utilise the dual talents of longtime producer, bass player and honorary third Polish Club member, Wade Keighran, helping the pair realise their wildest pop fantasies from within the confines of a rock and roll band.

Further proof in the pudding comes by way of the band’s latest video for We Don’t Care. Recorded in a karaoke bar, the clip features a live vocal take from Novak as he gleefully approaches the band’s own track with the zealousness of an inebriated also-ran.

Welcome back to Iguana, the only place where you can move forward and back in time simultaneously. It’s just like you remember it, but now the hangover lasts days. As for Polish Club, they’re still here. A bit older, a bit more forgiving and about as louche as they were in 2005.

See you behind the bar.