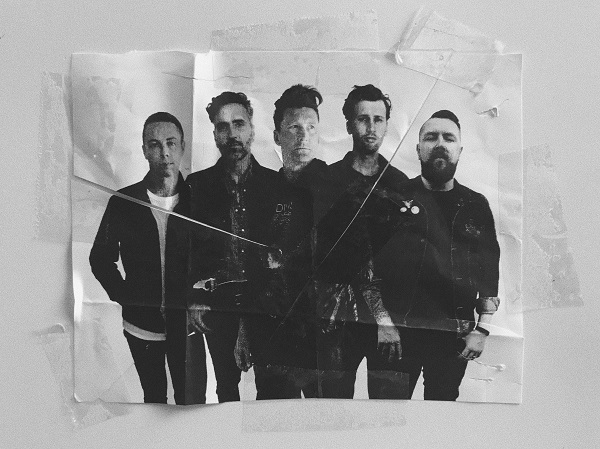 From Release: Australia holds a special place in the hearts of ANBERLIN and fans similarly embrace the band with open arms.  This coming May 2019, the love affair continues with the band returning to play shows in Brisbane, Sydney, Melbourne, Adelaide and Perth for the first time since announcing their break up in 2014. At these incredibly special shows, ANBERLIN will be performing songs from their classic albums ‘Never Take Friendship Personal’ and ‘Cities’, as well as career spanning fan favourites from their stellar discography.

What an absolute pleasure to talk to you again, didn’t think we’d be chatting again any time soon…
I know! It has been many, many a year.

It has, it’s actually been five and a half years since we last chatted, and boy howdy a lot has happened since then but let’s catch up, how have the last five and a half years been for you?
*laughs* Up, down, all over the place, some of the best of my life, some low points you know it’s life, I guess that is generally life, and I’ve lived a lot of it but it’s been yeah, fantastic.

Now this tour has come out of nowhere! So tell us, after a breakup back in 2014, how are you heading back to Australia, what’s happening here? *laughs*
So here’s how it goes, you know I think a lot of times when you start a band there is so much passion  involved, there’s so much motivation, everything is inspiring and life just seems so full and rich then when you take that same passion and you put a monetary figure on it and you start to make that as a n income and it becomes your profession, slowly the passion wanes and it just feels like what was once purposeful and full of life becomes a career and a profession and I think that sucks a lot of the passion out of it. So at the waning years of Anberlin starting in about 2013 it just became a chore and a task as opposed to life itself and invigoration and so basically we left in late 2014 exhausted and tired and just longing for the days to where life was once ours again. Over the years we realised you know going back with Anberlin when it’s on our terms and our timing and when it suited us as opposed to us being obligated to go on tour, or obligated to write record, obligated to do all the stuff, it’s back to being full of life, it’s back to being a passion and a joy and something we look forward to as opposed to vetoing tours and dragging our feet and getting on a bus or getting on an airplane. So of course when we all kind of got together and talked about it last year, last July, the first place we wanted to go was Australia because obviously this will be our fourteenth time going and to us it’s just everything that encompasses and embodies what we loved about the band. It was the crowd screaming back at us, the insanity of it all, the shows, the travel, the camaraderie, the brotherhood , and again the passion is all back and so Australia was first and foremost on our list.

I thought it was just because you missed us so much, and thanks for confirming that.
*laughs* It’s so true.

Tell us how these shows will shape up set wise, have you thought about set lists as yet?
You know the simple fact of the matter is we’re not trying to make it, we’re not trying to be a band, we’re not trying to reinvigorate, this isn’t like a reunion we’re not back together, the band isn’t back together and so for us we were thinking let’s put ourselves in the side of the fan, if we were a fan and one of our favourite bands broke up and they got back together what do we want our set list to look like and that’s why we really wanted to focus on albums like ‘Never Take Friendship Personal’ and ‘Cities’ and ‘New Surrender’ because down there that’s what sold the best. So I don’t want to call it a greatest hits show or anything like that, we definitely want to play a few songs out of the blue but we definitely want to focus on things that we ourselves if we were fans wanted to sing along to and so that’s going to be our set list.

OK well this fan would love to hear ‘Breathe’, so if you want to do that please do so!
Awesome! Well there you go! I like it.

So let’s get back to the return, after you all went your separate ways, what was the catalyst behind getting back together? Was it like you said did the passion just come back?
Well, no, I’m gonna be brutally honest. On that last year of touring we collapsed, there wasn’t fighting in the band, there wasn’t screaming or yelling, there was just simple exhaustion. We were tired, tired of the road, tired of our jobs, tired of our lives, and tired of each other, again there wasn’t any animosity but it definitely took about a year for people to start talking to each other again. It was no hard feelings, it was just time of life, we had literally spent the best past of twelve years together, seven, eight, nine months a year sleeping next to each other bunk next to bunk for twelve years, so we just kind of felt like we needed a break. After a couple of years we realised and I wanted to call a few of the guys and just say “If there’s any hard feelings or anything that I did , if I frustrated you…” I mean I was and it was really tough on me the last few years and I kept saying no to tours and didn’t want to be on the road and I just called and said “Hey man, if I ever frustrated you or if there was a point of contention on my part I just want to say I’m sorry.” We all had different visions of where the band should go the last few years and different visions of what real life looked like, you know some of the guys still wanted to be in a band, they still want Anberlin to go full time again and they know that’s not a possibility and they still even now. I just called and said “I’m sorry” and I think that was just being real with them and the impetus of saying “hey I really miss you guys, we are a band of brothers, we have spent more life with each other than our own parents or our own wives like you know more about me than anybody else, let’s be friends.” Then after friendship it was let’s talk about the good old times, then after the good old times it was like you know what would be so cool, go travel one more time, go see the world one more time and so that’s kind of how it all started.

You mention going to see the world one more time, I know a lot of people were absolutely Australia? What about us, what about my city? Can we expect to see Anberlin in more territories over the year?
You know, I don’t want to promise anything, we’re kind of just taking one step at a time and again we I think the majority of us love our lives where we’re at right now and don’t see the band as like a full time profession and I don’t ever want it to be, that was the whole thing that was frustrating us at the beginning just trying to have to feed so many mouths, tour managers and managers and lawyers and booking agents and it was kind of a perpetual machine that if we didn’t tour these people didn’t survive, so we felt almost obligated to appoint to tour and I don’t think any of us want to feel that way again, we just kind of want to be liberated. So honestly we have Australia in sight and if other territories kind of fall into place then that’s great, but for me like I’m just ecstatic about Australia.

We were too, I woke up and saw the announcement and had to check it was real…
*laughs* Well good man, I’m so excited, it’s gonna be great, just a few shows it’s not like we’re there for weeks on end but I was talking to a good friend of mine just today and he said “Man are you excited about Australia?” I was like “Dude, I just calculated it and I’ve spent almost four months of my life if you combine all of those tours, I’ve spent almost four months of my life in Australia!” That’s insane to me, that’s a lot of time, so it just feels cool to be back and see the same people, the same places, the same faces, so yeah, it’s surreal.

So… I should ask, is there a possibility of new music?
That’s one of those things that I don’t think will ever happen, because again this isn’t like a reunion, this isn’t a revitalisation or a rebirth of the band, we’re not trying to promote or push anything, so if there ever is new music it would have to be because… *sighs* I just don’t even know… I don’t think so, all cards on the table we have not written a single song, there’s not music being passed around or songs or anything like that. To me it’s just one of those things where if it happens it has to be natural but again another reason we don’t want to push a record is because let’s say we sign to a label then the label expects us to tour, then we’ve gotta get back… the obligation just makes it such a chore, I want this to be one of the nest tours of my whole life, I want this to be so full of life and laughing and just being ourselves and being friends again and brothers and family that kind of putting that much weight on whatever this is this soon it just seems like it would suffocate the band more than it would bring health.

Now it’s easy to say what’s changed over the years but what for you is the one thing that’s stayed the same about Anberlin?
It’s funny that at the core of who we are, that really never changes like our character, we may change like our taste in music, we may change cars, we may change clothes, but honestly who the guys are at the core that has never changed. Joey is still absolutely lovable and amicable, Christian is the most friendly guy you’ve ever met, Deon is the most loyal friend you’ll ever have, Nate is beyond creative, and not a single aspect of those guys has changed.

Lastly let’s look ahead to the future and this might be fun, finish this sentence for me, in 2019 Anberlin would like to…
Oh my gosh… in 2019 remember what we loved, I guess that what it is, just look back with not only utter fondness but be on stage in that one moment remember what captivated us and what kept us there for so long, I think that would be the best part of 2019.

Catch ANBERLIN back in Australia 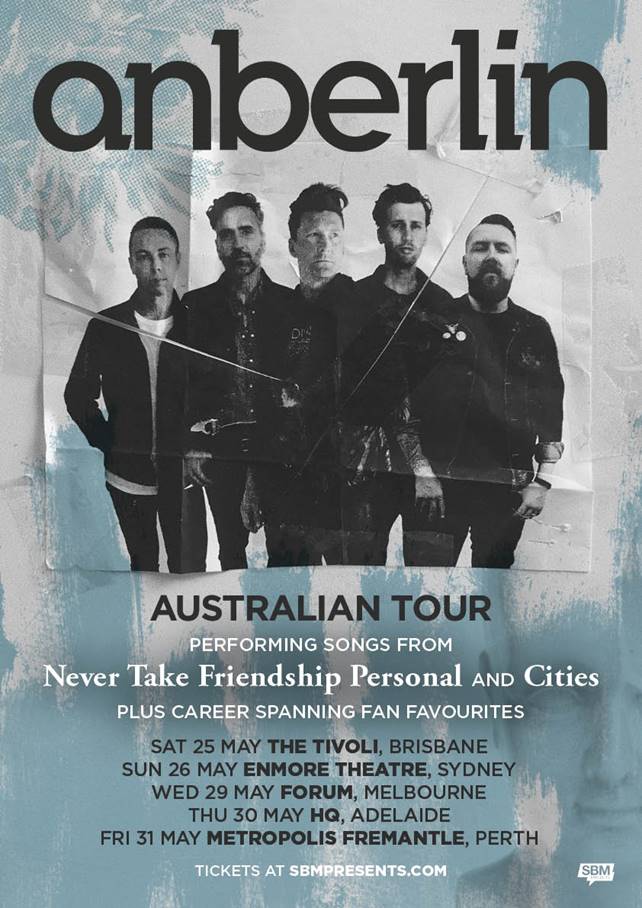