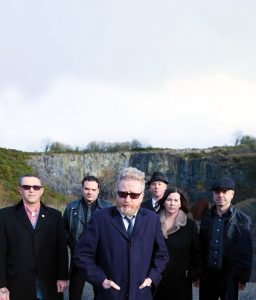 Due to high demand, catch quintessential Irish-American Celtic Folk/Punk band Flogging Molly are playing a SECOND Melbourne show at The Croxton this April! Known for their distinctive fusion of traditional Irish music and hard-hitting Punk Rock, their impassioned live show has won the hearts of many Aussies over the past two decades. A limited number of tickets remain on the first shows in Melbourne and Sydney!

Supporting Flogging Molly in 170 Russell and the Metro, Sydney will be Essex born songwriter Beans on Toast who has become something of a cult figure. With no sign of slowing down, we’re sure this eternal optimist singing songs about protest, love and poetry will get the crowd ready for Flogging Molly’s stomping set this April!

Also supporting Flogging Molly are Garage Rock band of brothers, Food Court. The Sydneysiders will be performing their scrapbook of stories of lost loves, lost sleep, mistakes, anxious minds and a light drizzling of optimism on top from their debut album ‘Good Luck’. After a successful national tour late last year, these guys know how to entertain the masses!

Twin sisters, Ward Thomas will be joining David Gray on his Australian tour this April. The first Country music act to ever hit No. 1 in the UK album charts will be taking to the stage in Melbourne, Sydney and Perth this April. First Sydney and Melbourne shows are SOLD OUT! Second dates and Perth show selling fast! David’s latest album ‘Gold In A Brass Age’ is due out on March 8th.

Get your dancing shoes ready as Jazz and Funk masters, Snarky Puppy whose latest album ‘Immigrance’ is due out later this month. Led by bassist Michael League, the quasi-collective is made up of some of the best musicians in the world. Supporting one of the major figures in the Jazz world will be Sydney’s, The Goods. Bringing a sound that reaches into the realms of spaced out Synth Funk, the trio will bring a wild and eclectic wild show ahead of Snarky Puppy’s performances. Tickets are selling FAST for both their Melbourne and Sydney shows!

Blues, Folk and Rock singer Alejandro Rose-Garcia a.k.a Shakey Graves has SOLD OUT his show in The Corner Hotel, Melbourne. Limited tickets still remain in Sydney, but don’t delay!

Denver based Rhythm & Blues band, Nathaniel Rateliff & the Night Sweats have SOLD OUT their first Melbourne show. Just like their musical career, tickets for their second show are soaring!

Capturing the hearts of many, American Soul and R&B singer Allen Stone has sold out his Factory Theatre Sydney show! Limited tickets remain for Melbourne and Brisbane.

Lukas Nelson and Promise of the Real just took out the BAFTA for Best Film Music for his collaboration with Bradley Cooper and Lady Gaga on A Star is Born! Neil Young’s bandmate, Lukas is one of the most requested artists to play Bluesfest and his shows in Melbourne and Sydney this April are proving just as popular! Tickets selling fast.