Oklahoma City punk underdogs are bringing their latest and potentially greatest release ‘SkyTigers’ down under in 2019, accompanied by the ever-dedicated melodic hardcore outfit No Trigger.

If the name doesn’t instantly ring a bell, fear not – you probably know who Red City Radio are. The Heartland punk band has flourished and grown in popularity without having any real help from the usual suspects. They’ve never been embraced by the hip websites, they’ve never had a big record label or a fancy booking agent. But most importantly, they’ve never stopped working hard – with several releases and support slots for bands such a New Found Glory, Less Than Jake and Strung Out under their belts. In March this year they released ‘SkyTigers’ – songwriter and vocalist Garrett Dale says “The message with SkyTigers is a message of acceptance and love. Accepting control over your own universe and taking a stand against hate, fear, and confusion… We hope that these songs make our listeners feel like there is someone who feels the same as them. Because there is.”

Joining RCR on their voyage are long time scene staples No Trigger. After forming in 2000, the first few years saw the band crowned “the best unsigned band in America” by Punknews. After a five year lull in new music (one which had devoted fans very saddened), No Trigger released their finest work yet, in the form of 2017’s ‘Adult Braces’ EP. 4 songs, 4 absolute hits. Recorded with Jay Maas and mixed/mastered with Jason Livermore, EP is as professionally produced as punk records come. The 2019 tour will be the Massachusetts melodic icon’s second trip to Australia, a rare chance for fans to see them in action.

Sydney’s very own Idle Threat are the lucky locals who will be joining these seminal US acts on their Australian excursion. They’ve just released their debut album ‘Rope Burn‘ and they’re ready to tear it up in front of unwitting audiences, who will undoubtably eat it up. They’ve been described by Hysteria Mag as “punk meets blistering metal undertones in a cacophony of passion and rage”, and citing influences such as A Wilhelm Scream, Comeback Kid and Only Crime, Idle Threat are set to destroy stages nationwide, so make sure you get down early. 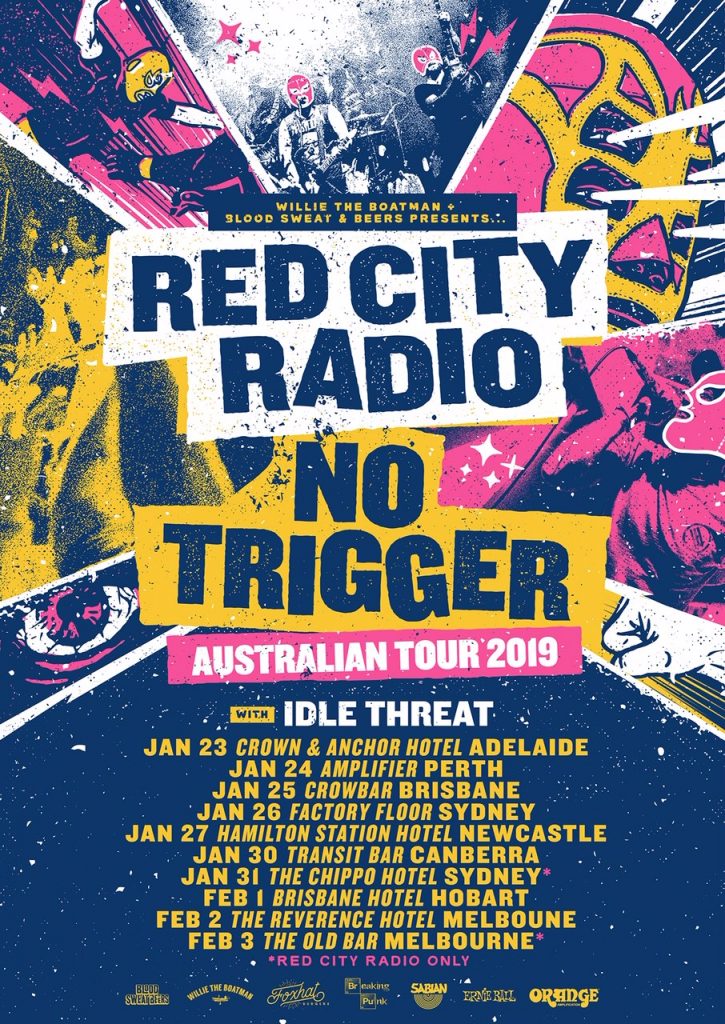