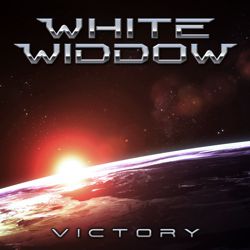 Formed in Melbourne, Australia in 2008 and centered around the Millis brothers Jules (Vocals – ex Tigertailz) & Xavier (Keyboards – 2 x Aria Nominee) and guitar virtuoso Enzo Almanzi. Raised on a healthy diet of 80’s Arena Rock and influenced by artists such as Survivor, Foreigner, Journey, Night Ranger, Starship, Dokken and Australia’s own Rick Springfield. In 2010 White Widdow signed with the AOR Heaven label and stormed onto the Melodic Rock scene across the globe with the release of their self-titled debut album throughout Europe.

After four successful studio albums and numerous live appearances, the Australians now return with their 5th record which is entitled “Victory”.

2018 has seen White Widdow re-enter the studio, celebrating ten years since the band began and an album cover that throws back to the style of their debut. “Victory” incorporates a strong Pomp element in the songs along with White Widdow’s traditional classic 80’s AOR sound, the band allowing their influence of bands like Giuffria and White Sister to really come through. Featuring over the top pompus keyboards, stacked harmony vocals from the Millis brothers and Enzo Almanzi’s tasty solos throughout. White Widdow are set to perform at Rockingham in the UK in support of the new album, followed by a tour through Spain, Greece and their native Australia.