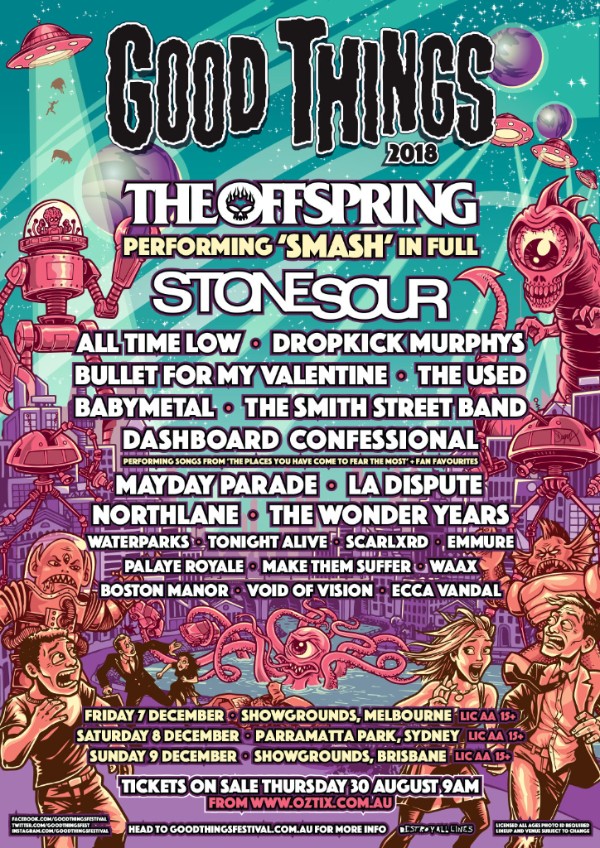 Something has entered the atmosphere.

Foretold through street posters, heralded through (not so) hushed murmurs of the people; Good Things Festival has once and for all emerged from the vast unknowns, bringing forth a new era for Australian alternative music fans, ushered in by an unstoppable army of some of the heaviest, and most alternative bands the universe has on offer.

What looks like an event from another galaxy, Good Things Festival, while out of this world, is not a hologram. With key launch sites located in Brisbane, Sydney and Melbourne, it would seem Australia’s East Coast is all well within range of Good Things Festivals sonic rays.

No one could predict such a Festival would be happening in our sleepy part of the Milky Way. But as we speak, across the gulf of space, minds immeasurably superior to ours begin to draw up their plans…to rock out.

Having performed over 1100 shows across the globe and sold more than 40 million albums worldwide,The Offspring are one of rock’s most exciting and enduring bands. The band are no strangers to Australian stages, but this time will be unique for the band and fans alike, with the group performing their genre-defining record, Smash from top to bottom. Released in 1994, Smash remains the highest-selling album of all-time on an independent label and features iconic fan favourites including Bad Habit, Gotta Get Away, Come Out And Play and Self-Esteem. They will be performing Smash in full for the very first time to Australian audiences and a rare bucket list for all The Offspring fans. You won’t want to miss out as you’ll never get this chance again.

Known far and wide as a truly incendiary live act, Stone Sour has built an international fan following through countless headline tours and performances at famed festivals such as Rock In Rio. They’ve achieved great success across all of their releases. From their eponymous debut album in 2002 where singles such as Get Inside and Inhale each received Grammy Award nominations for Best Metal Performance. They continued to have success with 2006 Come What(Ever) May reaching #21 on the ARIA chart, 2010’s Audio Secrecy debuted at #6 on the ARIA chart. The House Of Gold & Bones Part 1debuted at #13 while Part 2 saw Stone Sour reach #4 on the ARIA chart. Their most recent albumHydrograd debuted at #2 on the ARIA chart. The 2CD special edition of Hydrograd – featuring 13 rare or unreleased tracks including an acoustic version Song #3 as well as covers of hits from Rage Against the Machine, Soundgarden and Van Halen – will be released on August 31.

Throughout the course of seven albums, All Time Low has earned five Top 10 debuts on the Billboard Top 200, peaking at #2. 2017’s Last Young Renegrade stormed to #5 on the Australian ARIA chart. Their catalog of anthems includes the platinum-certified “Dear Maria, Count Me In” and gold-certified “Weightless” and “A Love Like War [feat. Vic Fuentes],” which received the highest honor of “Song of the Year” at the 2014 Alternative Press Music Awards. To date, they’ve garnered five Alternative Press Music Awards, five KERRANG! Awards, and been crowned “Best Pop Punk Band” at the Top In Rock Awards. Along the way, they’ve appeared in Rolling Stone and Billboard and graced the covers of Alternative Press and KERRANG! multiple times in addition to performing on The Tonight Show, Conan, and Jimmy Kimmel LIVE! Known for unforgettable shows around the globe, they’ve also ignited stages everywhere from Voodoo Music Experience to Warped Tour and on the road with blink-182, Fall Out Boy, Green Day and more.

After twenty years, Dropkick Murphys remain bigger than ever, having sold over 6 million albums worldwide. The band continues to sell out venues around the world. They’ve played Boston’s Fenway Park and been personally invited to share the stage with everyone from Foo Fighters to Bruce Springsteen to Mumford & Sons. The group’s single “I’m Shipping Up To Boston”– from 2005’s Certified Gold The Warrior’s Code–has sold nearly 2 million copies. “I’m Shipping Up To Boston,” a song with lyrics penned by Woody Guthrie, gained mainstream notoriety after being prominently featured in Martin Scorsese’s Academy Award-winning film The Departed. It can be commonly heard at sporting events and on television as a theme song for many sports teams (even outside of Boston).

Bullet For My Valentine are one of the biggest British metal acts in music history. Five albums in, they find new ways to invent intelligent noise and remaining unshackled by the legacy that comes with being masters of the trade. After initially forming as Jeff Killed John in 1998, eventually securing a five-album major label deal, their 2005 debut The Poison and 2008 follow-up Scream Aim Fire would provided an injection of what heavy music was very much lacking at the time. Consecutive full-lengths Fever, Temper Temper and Venom would cement their stature as modern masters, selling millions of albums worldwide and being crowned Best British Band at the Kerrang! Awards three years in a row – where they’ve also been awarded for Best Single, Best Live Band and Best British Newcomer. It’s not just the press and fans that have afforded them such faith – even the heroes that inspired them in the first place, bands like Iron Maiden and Metallica, have personally selected BFMV to hit the road and share the stage with them.

Over the last 15 years The Used have released a collection of albums that have shaped the space of the alternative rock scene. High energy live shows, gut wrenching relatable lyrics, and melodies that blended pop sensibility and hard rock creating the perfect combination to make an everlasting impression on fans globally.

BABYMETAL, the Japanese metal outfit will be making their long-awaited Australian debut as part ofGood Things Festival. They have performed around the world and on the main stage at UK’s prodigious festival Sonisphere Festival 2014 in front of 65,000 festival goers and supporting Lady Gaga on her ArtRave: The Artpop Ball Tour that same year. BABYMETAL have taken the main stage at the massive Reading & Leeds by storm and have shared stages with the likes of Red Hot Chili Peppers, Metallica, Guns N’ Roses and Korn. BABYMETAL’s campaign for world domination continues, with only the Fox God knowing what the future will hold. For years, fans have been asking…SCREAMING for BABYMETALto tour Australia and Good Things Festival has risen to the occasion.

General Public tickets on sale Thursday 30 August, 9am through www.oztix.com.au