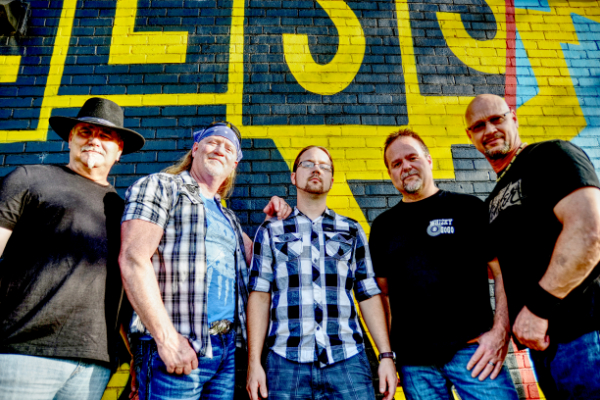 “…Moonshine Saints don’t stop—we’ll continue creating new music, not just because we love doing it, but because our fans deserve our best effort all the time.”

From Bio: The Moonshine Saints are collectively singer-songwriter Sean Ward, guitarists Matt York and Steve “Doc” Morris, with rhythm section bassists Bob Lynn, and Justin Barber on drums. The Moonshine Saints bring a heavy Southern Rock sensibility to any audience. The dueling expertise of guitarists Matt and Doc adds layers of excitement to the award winning music that is The Moonshine Saints. Justin and Bob form a full throttle sound that really brings the thunder. Leader of the Saints Sean Ward’s highly identifiable vocals add flavor to the mix and the rest is magic. The authenticity of the band’s sound comes from their shared Oklahoma roots, a sound that is unique and genuine. The Moonshine Saints offer enough musical diversity to please any listening audience and enough chemistry and charisma to keep you coming back for more.

We teamed up with ReverbNation to share some talent with the world, check out Moonshine Saints from Tulsa, OK, we dug their sound and found them very worthy of being one of our Best Things You’ve Never Heard!

Let’s start with the basics; for those that aren’t aware of you, can you please give us the abridged version of your story, and how you would best describe your music?
The band was formed just a few years ago.  I was working as a solo performer and I was never really comfortable with that.  When I was a kid, my big dream was to be the lead singer of a band not the entire band.  So the first person that I contacted was Matt York, a guitarist, who I’d met years ago at a warehouse job.  Luckily, he was interested and was already playing in a band with Justin Barber, drummer.   The three of us went into the studio to record what became the Moonshine Saints’ first single, “Sugar & Thunder”.  That seemed to go well, so we knew we needed to bring on two members permanently, another guitarist and a bass player.  Matt and Justin suggested Doc Morris, the guitarist, and Bob Lynn, the bassist.  Both were pretty busy at the time but we showed them a couple of the tunes we wanted to do and they were interested enough to throw in with us.  We set about recording the rest of Six Ways to Sunday, Volumes 1 & 2.

My solo album had gotten enough attention that I had been honoured with Country Artist of the Year at the 2012 Los Angeles Music Awards.  The producers at the award show had struggled a bit with classifying my music as Outlaw Country or Southern Rock.  So when the new guys came on, we asked the same questions.  How do we define what we’re doing here?  All of us share a common background in rock music and so our style has its roots in rock. In the end, we just let the songs be what they are and allow the listener to classify it as they will. If pressed, I would define it as Southern Rock with a healthy dose of Outlaw Country and Blues.

Can you now please introduce each band member including yourself, and give us a rock ‘n’ roll fact or myth about each of you?
Matt York (Guitarist) Matt kicked so much ass as a guitarist that he was forced to move to a neighbouring community as there was no more ass left to kick.

Justin Barber (Drummer) Justin’s technique is so refined and precise it was recently added to the course work in all medical schools regarding the removal of spinal tumours.

Steve “Doc” Morris (Guitarist) Strictly speaking, Doc is not a trained doctor. The unexplained full sized stethoscope neckless he wears does cause some confusion but, the guitar in his hands should clarify things a bit.

Bob Lynn (Bassist) Bob is an amazing bassist… and guitarist…and pianist. Come to think of it, how did we get him to join this band?

Sean Ward (Vocalist) Sean Is the singer. His first love was guitar and after a year of guitar lessons and hours and hours of practice, Sean is the singer.

In terms of your music and any releases, instead of giving us a standard review, let’s say if you had to give us your best door to door sales pitch to try and convince someone to listen to it before they slam the door in your face, what do you say to them?
Good afternoon, madam!  My name is Sean, and I’m representing the Moonshine Saints.  I can see  that you’re in need of Hummability!  What is Hummability, you ask? Excellent question, ma’am! I can tell you’re very intelligent.  Hummability is the type of music that you hear just the one time, and it immediately imbeds itself in your mind, most likely in the pleasure center, giving you the ability to instantaneously recall the melody and be immediately able to—and have the desire to—hum the song as you go about your day.  Doesn’t that sound terrific?  Wait, don’t answer yet!  Hummability has a direct correlation to productivity!  When you need something to get you moving, nothing beats Hummability and nothing delivers it like the Moonshine Saints.  Thank you for your time—and how much can I put you down for?

With your song writing, what do you consider to be the most important ingredients that make up one of your songs?
I would say “engagement”.  The proper amount of rhythm and groove, combined with melody that connects with your musical sense, along with lyric content that is interesting, poignant and hopefully, clever.

Are there current plans for any future releases you can give us the scoop on?
We did actually just complete a recording of a new song that we are in the ending plans of shooting a video, and we’re making demos for the songs for our next album.  Six Ways to Sunday, Vols. 1 & 2 is still new and freshly released so hopefully the fans will be spending the next few months working their way through that.  While that’s happening, Moonshine Saints don’t stop—we’ll continue creating new music, not just because we love doing it, but because our fans deserve our best effort all the time.

So what bands did you grow up listening to and how did they help create the style of music that can now be heard throughout your music?
Growing up in Oklahoma, you have no shortage of really good country music to listen to.  Growing up in America in general, you have no shortage of incredible rock music that’s easily accessed.  So both genres certainly play a part in my musical background.  So to give you an idea of that, two of my favourite albums were Willie Nelson’s “Redheaded Stranger” and Judas Priest’s “Screaming for Vengeance”.  Listening to that level of diversity really taught me that it wasn’t necessarily genre that I loved, it was great songs, regardless of genre.  I will admit that the heavily distorted guitar on “10” appeals to me a bit more than an acoustic guitar does.  The bands I listened to the most were Kiss, Priest, Cheap Trick, Motley Crue, ZZ Top, and AC/DC.  All of those performers share a powerful sense of melody within the thunder of the guitars and to me, melody is everything in music.

In terms of touring, here’s your chance to plug any upcoming shows, and for those that haven’t seen you, how would you describe a typical live show of yours?
With the release of the new album, we’re currently booking events and festivals for fall, and we’re doing quite a bit of radio promotion in the meantime.  What you’ll see when you see Moonshine Saints is very skilled musicians who are laying it down loud, clear, and with an abundance of swagger.

For a bit of fun, say you get the chance to open for any artist or band in the world, who would they be and why?
Leonardo DaVinci, because it would be fascinating to watch a group of 14th century Italians wondering, ‘What in the hell am I looking at?”  Or Kid Rock, cause I think that’d be a really cool bill.

If you were to cover one song that no one would expect that you’d cover what would it be and why?
Easy.  Kool & the Gang’s “Misled”, because whoever wrote that song—I’m not sure if it was Kool, or the Gang—unknowingly wrote what would be a super-bangin’ rock or metal tune, stripped down to big guitars and thumpin’ drum and bass.

Lastly, here’s a chance to grab a magic lamp and from it you are granted three wishes.  They are:
1.  Let’s just get world peace out of the way, ‘cause if I don’t say that, I’m the biggest jerk that ever lived.
2.  Moonshine Saint Music cures all diseases and cancers.
3.  Everyone reading this article would see Wish #2 as a very real possibility and therefore listens to all the Moonshine Saints music, and shares it with their friends and family.