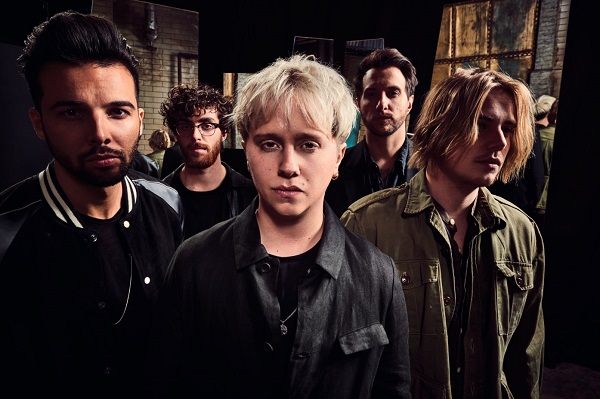 “It wasn’t so much about coming back so quick, we’ve just started out there and saw how well it was doing so for us it just made sense to come back it’s like we wanted to fit it in and not leave Australia out for a long time because it was so good the last time we were there so it made sense.”

From Release: Following on from their recent SOLD OUT tour in December, Nothing But Thieves have announced their return to Australia for shows in July. The tour will kick off in Sydney, and take to Brisbane, Sydney then Melbourne before finishing up at the Capitol in Perth on Thursday 31st July. On the back of their rollicking 2017 album Broken Machine and 2015 self-titled debut album, Nothing But Thieves have gained a huge amount of attention through hits on Triple J including “Trip Switch” and “Amsterdam” and are widely expanding their fan base around the globe with each new tour they conclude. Fans are encouraged to act quickly to not miss one of the most anticipated show of the year.

While in his flat in London Conor gave us a call to talk about Nothing But Thieves return to Australia, their newest album, advice, learning curves, and more…

You guys were just here in December last year and heading back next month, what do you think it is about Australia that just loves you guys?
You know what? That’s a tough question why do people love us? I don’t know? Why do people love anything? It wasn’t so much about coming back so quick, we’ve just started out there and saw how well it was doing so for us it just made sense to come back it’s like we wanted to fit it in and not leave Australia out for a long time because it was so good the last time we were there so it made sense.

For those who haven’t seen you and those lucky enough to get tickets, what can people expect at a Nothing But Thieves show?
I mean it’s very energetic, it’s a high paced show we have a range of songs but we try and keep the hour and twenty five set keep it going you know what I mean. We like to think our sets are well crafted so there’s moments of peace through it but there’s a lot of high energy rock and we have a lot of fun, we just kind of lose ourselves in the music and stuff and we try and immerse the crowd as much as possible and I think people react to that and people keep coming back. Without being arrogant I’d like to say we’re a good live band and we pride ourselves on that so people keep wanting to come back and see us.

Broken Machine has been out now for about nine months, how has the album cycle been so far for it and for you?
It’s been good, it’s gone quick to be honest I can’t believe it’s been nine months, it’s like it came out yesterday but we’ve been touring so much that time’s just flown. It’s been good, it’s been a really good year and I think the album’s reacted well and I think it’s gone down better than the first album which is great because it went down well.

In the two years since your debut album what for you has been the most notable change in how you work in the studio?
Hmm… we kind of just knew what we were doing. We were eighteen / nineteen when we were recording the first album and writing it so it was just having fun and not really knowing what to do, but this second album we’ve all been around producing and been in the studio a lot more and it just clicked, we knew what to do and it happened really quick, we put it together in six weeks and the first album we did in three or four months so it was a lot quicker but that pressure kind of made us very creative you know?

Was there one piece of advice you were given when you started this band that has stuck with you over the last six years
Yeah actually, it was from our manager who just basically said ‘no one wants to listen to shit songs even if you look good’ which is quite funny, I completely agree it was like what it translated to us was you just need to write and write and write and not worry about anything else around within the band and stuff like that because we just wanted to get out there and tour straight away when we were kids and we had no real good material so our manager pushed us to write continuously and we wrote for like a year and a half until we had any songs for the first album and we just made things kind of acceptable I guess because it was poor *laughs* but yeah I’d say just write and write and write until it clicks, that’s how it starts.

In being a band for over six years, what would you say has been the most notable learning curve for Nothing But Thieves?
I think the most notable learning curve for us is there’s no manual on how to be in a band you just kind of see, you see on TV and as much as you see the glamorization of it you also see the terrible parts of it as in you see people dying early and the drug addictions and all that stuff and families breaking up, so you get thrown into this whirlwind lifestyle that as I said there’s no guidebook so you’ve got to kind of teach yourself what it is, so for us that first few years of touring it all just kind of escalated very quick and especially for myself it was very much I just developed sleeping issues quickly and nightmares and stuff, so for me it was learning how to control the lifestyle we live and then kind of make it more home like in a sense and have the odd break, We just toured for three years straight so for me was just figuring out how to do it and not kind of kill myself basically and not be over the top *laughs*.

Nothing But Thieves Australian Tour Dates: 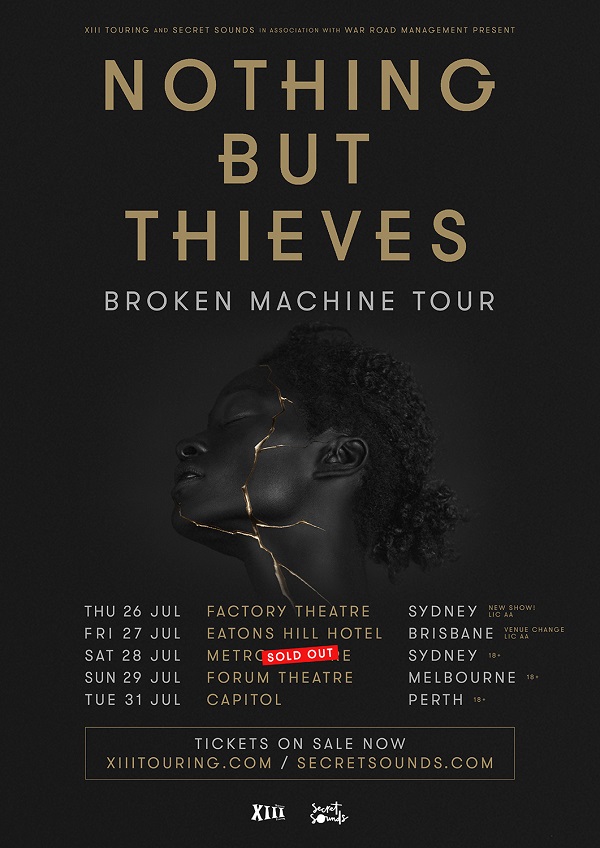