Tonight is set to be a musical masterclass of the greatest proportions, two bands that amazingly have never toured together, one in Australia for the first time and one for the first time in twenty five years, both absolute masters of their craft, so take a deep breath, strap in, and get ready for this ride.

Here we go! For the first time ever welcome to Sydney, Mr Big.

Oh my god the show starts with ‘Daddy, Brother, Lover, Little Boy (The Electric Drill Song)’ and let’s just think about why has it taken so long to hear this live here?! The drills come out for the solo and Billy Sheehan and Paul Gilbert both shred it perfectly and I’m in heaven. “Sydney, Australia we made it” Eric Martin says over a sea of cheers as the opener finishes. Wow. ‘Undertow’ continues the musical masterclass with the ridiculousness of Paul and Billy not to mention the vocals of Eric and those four part harmonies with Matt Starr filling the band out. Paul solos in ‘Alive and Kicking’ as the crowd gets clapping along and well they nailed that one, pretty sure I can’t see them not doing that for all of them so I’ll stop saying that now. Then we get the tissues out for ‘Take My Heart’ as the intro gets played exactly as it should be. What a song that is and so stoked they played it!

“This is for you, Pat…” Eric says as he introduces ‘Take Cover’ and we all wish he was here to witness this and be here on this first Australian tour. We miss you, Pat Torpey but your spirit is here and the guys are kicking ass for you. This song is a monster and it’s also my favourite Mr Big track and getting to yell “save my soul” back to the stage was perfect. Then bathed in green light that opening riff of ‘Green Tinted Sixties Mind’ hits and the crowd goes nuts, yeah this is most definitely a fave of those here and again just hearing these songs live is a pleasure, there’s just so much joy in the room, from the band and the crowd. The musical stop and harmony lyric with no music here was simply outstanding. I’m just shaking my head at this point as it’s hard to comprehend. They head into ‘Everybody Needs a  Little Trouble’ with a big chunky riff and blistering solo from Sir Gilbert. ‘Price You Gotta Pay’ gets a little bluesy and wow, Eric just got behind Billy and played bass while Billy harmonicad the shit out of it! That was great!

Time for Paul to give us a solo and if you hadn’t realised already yeah that Cat can play. A little ‘Back in Black’ starts it off then followed by a whole lot of perfect notes and outstanding talent, flawless. Once again, wow. The solo leads into ‘Open Your Eyes’ with its chunky riff and then as Eric and Paul throw on an acoustic it’s time for ‘Wild World’ it’s sad to look at the stool set up where Pat would’ve been during this part of the set. The guys honour him by having it still set up and that’s just so awesome and the song sounds great here tonight too as we get to sing along. Going old school with ‘Rock & Roll Over’ with another effortless solo from Paul. ‘Around The World’ with its super harmonized chorus sounds amazing. How do I even explain what just happened in that solo as Billy and Paul shredded in sync and did not miss a beat, fuck me. I just can’t even explain it. You had to see that piece of musical brilliance to understand it. Gobsmacked.

Billy has stayed on stage to show us how a bass solo can be interesting and what he’s doing with his instrument isn’t human. The man is a master. That lead straight into the best intro of the night with once again Billy and Paul duelling before we’re ‘Addicted to That Rush’ and we got to ‘whoa oh’ the shit out of it! What a rocker that is. Band introductions are followed by ‘To Be With You’ which as you could imagine was nothing short of amazing. Plus any song with a key change is always alright with me. Hearing that song live for the first time after hearing it for twenty six years was just the icing on the cake.

Billy barks and we get bitten by the dog as ‘Colorado Bulldog’ closes the set and Holy shit, as I’ve said I’m just shaking my head, that was just absolutely phenomenal and there’s only one way it could be topped and the only way is by the next band, but Extreme, you’ve got some work to do. Thank you, Mr Big hope to see you again. 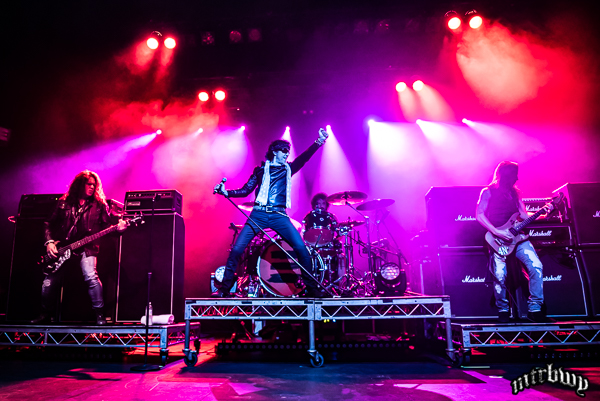 It’s been 25 years since Extreme were in Australia so let’s see just of or how one of the most amazing shows I’d ever seen back in 1993 can be bettered.

Bathed in darkness the band stand on stage and the guitar squeals and ‘It (’s a Monster)’ begins and it is on. Wow. Gary Cherone is moving like it’s 1992 and is on fire and let’s not even mention how good Nuno Bettencourt is. Much more on that later. “It’s been a long time coming” sings Gary as Nuno hits the opening riff of ‘Li’l Jack Horny’ and we get to sing along as they absolutely slay this one. My god they are tight. But it’s when the drums kick in and Pat Badger hits those notes that start ‘Get the Funk Out’ the place goes nuts. This is perfection. Wait. The solo is coming up. Stand by. Yep. Nailed it. This is just energy personified. What a start!!!!

Oh man I’m not going to be able to cope! The intro to ‘Rest in Peace’ just started and I’m in still hanging out in heaven from earlier. We got to yell “ban the bomb!!” and then the whole thing was just outstanding. The playing in this band is simply absurd and they’re not holding back as they take us straight into ‘Hip Today’ and the driving bass and drums keep this one rockin’ as Nuno plants a foot up on the fold back and shows us why he’s one of the best guitar players in the world. These vocal harmonies are again second to none. Oh wow!! Let’s go back to the first album and ‘Play With Me’ and they don’t miss a word of this unbelievably fast lyrically challenged song. Then right before the blistering guitar solo it stops dead and Kevin drum solos and joined by Nuno as Gary and Pat have a well-deserved rest. Then after dropping a pick and having a laugh Nuno restarts the solo like it was on purpose and he smashes it out of the park. This guy isn’t human I swear. Damn that was impressive.

They set up a drum kit at the front of the stage and line up to take us back to ‘3 Sides To Every Story’ with the bitchin’ bass intro to ‘Tragic Comic’ and a great rendition of it indeed and then as it fades mid song they take it straight into ‘Hole Hearted’ which just sounds so great tonight. What a great song that is! You could tell that the casual Extreme fan here was happy as they belted this one back to the stage and then with a “yee haw” we cheer. Nuno stays on stage as the others depart and he thanks us, tells some jokes and even belts out a “Wanted” as he tells everyone how good that Bon Jovi song is and I’m extra happy now! He just absolutely nails ‘Midnight Express’ on the acoustic and when he jokingly says the promoter could only pay them by note, well he just made about $3 million ha ha. The band return as Gary and Kevin start ‘Cupid’s Dead’ with a killer rendition of Sam Cooke’s ‘Cupid’ then the band tear into it. The vocals are just sublime in this one! Then to have Nuno and Pat solo at the front was just wow. My god.

Nuno is jamming right now as it turns into ‘Am I Ever Gonna Change’ sticking with ‘3 Sides…’ and an interesting choice but hearing that live was a masterpiece. They’re playing ‘Take us Alive’ now and the only track from ‘Saudades de Rock’ tonight, this funky jam was a surprise addition but it kicked ass. Stools appear at the front of the stage and Nuno and Gary sit down for you guessed it, ‘More Than Words’ and twenty five years ago lighters were held in the air while this one was played but tonight it was a sea of phones raised to capture the song that most would’ve been introduced to Extreme through. They sang it, we sang it, it was a moment and one you could tell meant a lot to everyone here.

It didn’t stay slow for too long as Nuno pretty much could’ve yawned while he played ‘Flight of The Wounded Bumble Bee’ note perfect into the intro of ‘He Man Woman Hater’ which was jokingly cut short as they launch into ‘Decadence Dance’ to close the show, Pat pushes Gary out for a lyric, they absolutely destroy this in the best way possible and give us a closer worthy of this absolutely jaw dropping show.  The band get down into the crowd to say goodbye with a lengthy and well deserved send off for a band that just blew everyone away. I’ve not seen anything like that in a long time.

Tonight simply was not just more than words, it was beyond words.