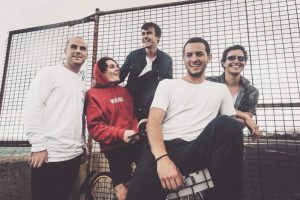 Sydney’s Maverick are really ramping things up in the lead-in to the release of their new EP State of Mind! The Sydney “No-F#cks-Given” band are today releasing the second taste of the record, a massive anthemic punk banger called ‘Resolve’ – and they are also on tour to celebrate the record and in support to both Hellions and Bare Bones!

The EP ‘State of Mind’ is out next Friday March 16 and can be pre-ordered on iTunes and all good digital outlets and physical pre-orders can be purchased at dogfightrecords.com. Resolve will be available to stream from this Friday and Longevity is available to stream now in Spotify and Apple Music. ‘State of Mind’ was recorded at Karma Sound Studios in Thailand and will be released through Dogfight Records.

Maverick are legit. Running amok in Sydney’s gritty southeast from an early age the Maverick boys are no strangers to good times, pits or Sunday morning tins. These five individuals live the lifestyle they write about and their attitudes and ambition are as heavy and large as their sound.

In a time when everyone is playing to a crowd or changing to follow the latest trend, it’s refreshing to have a band that could not care less what you think. They are a band that has zero concerns that Monday morning is fast approaching and calling in sick is no longer an option. It’s a headline slot to the masses or nothing – and they’re not leaving when they’re told. Maverick are coming in hot, bounce with them in the pit or end up under it!

Grab the ‘State of Mind’ EP now – punters can Pre-order at iTunes with instant download of Longevity and there are exclusive State of Mind bundles at the band’s label’s Dogfight Records store.