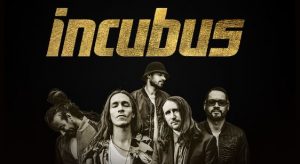 In 2018, INCUBUS will return to Australia for their first headline tour in six years to play three shows along the east coast in Brisbane, Sydney and Melbourne. These shows will be the first chance for fans to hear new tracks like ‘Nimble Bastard’ and ‘Glitterbomb’ from their aptly titled eighth studio album, 8. As well as a plethora of hits from their expansive back catalogue spanning the past 20 years.

Tickets for all shows go on sale at 10am this Wednesday, October 25.

My Live Nation members can secure tickets first during the exclusive pre-sale beginning tomorrow at 10am, October 24.

Since 1991, the iconic multiplatinum Los Angeles rock band have sold in excess of 23 million albums worldwide thanks to their uncanny knack of writing instant radio hits, landing four Top 5 debuts on the Billboard Top 200 and one #1 album.

A spontaneous approach to their set lists, high-octane performances, and a consistently great live show has allowed these sonic chameleons to continuously genre hop, leading them to share stages with everyone from Linkin Park, and OutKast, to Moby, Jane’s Addiction, Queens of the Stone Age and let’s not forget this past August when longtime fan, Solange Knowles joined them on stage in New Orleans to sing ‘Aqueous Transmission’!

Building a diverse fan base around the globe who are drawn to the unpredictable, powerhouse experience of their live show.

“Incubus were easily one of the highlights of the weekend, with Brandon Boyd being one hypnotic motherf*cker.” Monster Children

TICKETS ON SALE
10AM WEDNESDAY OCTOBER 25