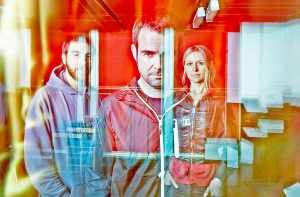 On their fifth tour of Australia, Future of the Left will forge a deluge of tense, confrontational and bloody furious rock music for eager Australian ears. Crackling with animosity, Future of the Left’s live appearances are typically driven by frontman Andrew ‘Falco’ Falkous’s salient social commentary and nihilistic humour. It’s addictive suff. The evidence is in a string of sold out Australian dates and hoards of curious punters at their Meredith, Golden Plains and Falls Festival appearances.

FOTL unveiled their fifth long-player ‘The Peace and Truce of Future of the Left’ early last year via their own label Prescriptions Music. It is, once again, their best one yet, obeying the universal law that the new album is always the best one, otherwise it wouldn’t be released in the first place. The Music said it’s “never pretty, but always effective.”Beat Magazine called it a “twisted revolt against apathy.” Good.

Cynical, scatching, sharp as a tack and yet somehow SO MUCH FUN, Future of the Left are one in a million. Diamonds in the rough. Stark penguins in the sea of rainbow parakeets that is contemporary rock music.