Atom Willard of Against Me! 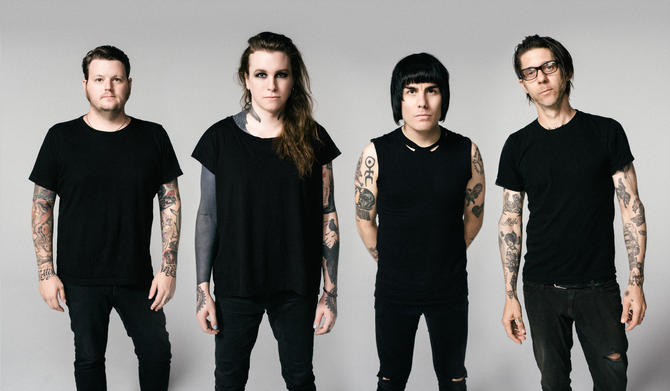 “I do like to say we’re a real high energy live show and everybody’s very happy to be there, everybody on stage is excited to be where we’re at and we’re all having the most fun. We take it seriously, it’s not goofy by any means but we take having fun very seriously too.”

From Release: Celebrated American rock band Against Me! have announced they will be heading out this May for a run of Australian headline dates to celebrate the release of their new album, Shape Shift With Me. They will be in the country as part of the Groovin The Moo lineup and will be playing additional shows in Brisbane, Hobart, Melbourne, Wollongong, Sydney and Perth supported by Melbourne’s own Camp Cope.

At home in Los Angeles, Atom of Against Me! gave us a call to talk about the band’s return to Australia for Groovin’ The Moo and headline shows, set lists, their newest album, and more…

You’re heading back to Australia for Groovin’ the Moo as well as some headline shows, do you have to approach festival sets and headlines differently?
I mean you have to do it a little bit differently, you can’t play the same songs in the festivals that you would in a headline show you know what I mean? You’re pretty sure that all the fans are there to see you at your own shows but at a festival you know you’re gonna reach some new ears so you don’t wanna play the stuff that may be a little less familiar. People get excited when you pull something out from the first or second record at a headline show they’re like “Wow, I can’t believe they’re playing that” or whatever but in the bigger festival situations it doesn’t work out that way I think.

As the catalogue does grow does it get harder to put a set together even for festival shows as new material comes in?
You know what? The thing that’s hard is keeping it short enough *laughs* we make a set list of all the songs we want to play and we’re excited about and then all of a sudden it’s like holy mackerel that’s thirty five songs and none of us really want to do that, so we end up cutting it down and it’s like “OK… well shoot, who really wants to play this song?” and it’s like “Oh I do!” or whatever and it’s a challenge but like I say it’s a good problem to have.

I personally haven’t yet seen Against Me! live, so for the people like me who will be experiencing you for the first time, how would you best describe your live show?
I mean I never want to build it up too much and have somebody be let down. I do like to say we’re a real high energy live show and everybody’s very happy to be there, everybody on stage is excited to be where we’re at and we’re all having the most fun. We take it seriously, it’s not goofy by any means but we take having fun very seriously too.

And thirty five song sets…
Hey, hey, hey… *laughs* really we try to keep it to twenty five for a headline show, maybe twenty seven or something and that’s a lot of songs when you really look at it. It tends to go by really quickly but holy cow.

In being to Australia before, is there a memory that stands out from a previous trip here?
I mean I’ve had so many trips to Australia, I’ve been going there since the mid 90’s or something *laughs* so there’s been a lot of good times for sure. I’ve had really good shows with Against Me! there more recently, the crowds are so fun, everyone’s so excited and so stoked to be there and not afraid to let loose and that kind of thing is pretty nice to come across, you want to see people out there that are psyched and that are super stoked to come and see you play.

‘Shape Shift With Me’ is your second album with the band, was it somewhat easier this time around working with them in the studio?
You know it was different because a lot of the songs on ‘Transgender Dysphoria Blues’ had already been written before I came into the fold and although I was able to colour the drum parts and do what I wanted to do and Laura’s very receptive to suggestions and that kind of thing, so there wasn’t much song writing besides ‘Unconditional Love’ and maybe a couple of other ones on ‘Transgender Dysphoria Blues’. Whereas this one every song was new, it came together from basically being on tour and playing songs at sound check and Laura says “hey come and listen to this idea” and we’d go back and forth on stuff and it was really an organic process and it came together over the course of two or two and a half years of touring, but yeah it was pretty easy but it’s all just degrees of easy *laughs* nothing’s really that hard.

It’s been out for just over six months, how has the cycle been so far?
I mean it’s been great, it’s kind of wild though we haven’t played too many shows of our own, we did two maybe three weeks in Europe where it was all headline shows and then we’ve had headline shows here and there but we’ve just had a long tour opening for Bad Religion, we just did a long tour opening for Green Day and that kind of stuff it’s hard to gauge what those people think of the new record because you’re just trying to figure out what those people think of you period *laughs*. I mean the Bad Religion fans there’s a lot more crossover and they were easier to read, but with the Green Day fans there was a lot of new faces out there.

In your four years with the band, what if anything have you been able to do that you haven’t been able to do previously with other acts?
I think the main thing is being able to kind of jam out on certain things during a live show and a type of looseness and a type of spontaneity that hasn’t really been that present with a lot of other things that I’ve done, either because we were dealing with computer tracks and it wasn’t that kind of scenario or environment but with Against Me! there’s a lot of stuff that happens on the fly, and I’m not saying it happens every show but it happens enough for me to be aware of it and excited about it.

After Australia what’s next for the band?
OK so we come home and I think we’re off for maybe ten or twelve days and then we go to Europe for six weeks *laughs* that’ll be a lot of festivals and actually a string of shows with The Bronx, we’re doing a co-headline thing with The Bronx which I’m really excited about because I love The Bronx, so we’re going to rage through France with The Bronx.

WEDNESDAY 3 MAY – THE TRIFFID, BRISBANE
Tickets available from thetriffid.com.au