Paul Mahon of The Answer 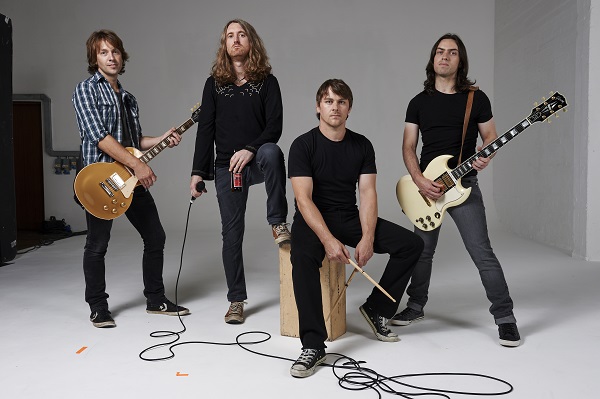 “It is seen as a ‘departure’ but for us it is a ‘progression’. There are certainly much darker themes and arrangements on Solas and the production and playing is very different to our normal rock n roll approach. We used our home studio much more and embarked on a journey of experimentation without being necessarily too worried about following the traditional rock n roll formula.”

From release: “They are going to be huge” British Kerrang magazine once predicted – oh, how awfully right they were! Meanwhile, Northern Irish hard rockers The Answer gave us five fine, diversified albums only to now blow everyone away with the lush beauty that is Solas – a bold step in evolution for the band and past genre boundaries. This is not your typical The Answer classic rock album, musically and lyrically the band have progressed and have delivered a contemporary rock album with Gaelic influences. Solas is the Gaelic word for “light” – and how could this not be an omen? The Answer`s songwriting has an unchained quality to it: epic arrangements, bombast, airy folk melodies and guitar sound walls build a timeless and thrilling masterpiece which embodies the crowning of the whole career of the Irish!

We had Paul from The Answer funnily enough answer some questions for us about the band’s new album ‘Solas’, its creation, its departure, touring, and more…

Thanks for your time, Paul. Now, I spoke to Cormac about a year and a half ago, so let’s pick up where I left off with him, how have the last eighteen months been for the band since the release of ‘Raise a Little Hell’?
That seems such a long time ago! We toured RALH in UK, Europe and then in the USA with Whitesnake. We loved that album but a lot of media just thought it was OK and nothing great so that was disappointing because I think there are some really great tracks in there like Last Days Of Summer. We arrived home from the US Whitesnake tour and things were pretty bleak – we lost a fair bit of money on that tour and Cormac had a young new born son who was ill in hospital so all of a sudden the idea of being in a rock n roll band took a bit of a back seat and we all sort of did our own things for a bit.

Your new album, ‘Solas’ has been out for almost a month now, how has everything been since its release?
It’s been great because we’ve released an album that is a bit of a statement and which showcases a whole new writing, performance and production side to The Answer.

The album is quite a departure from The Answer many would expect, when doing in to make the new album did you have an idea of what you wanted to do or did the album evolve into what it’s become?
It is seen as a ‘departure’ but for us it is a ‘progression’. There are certainly much darker themes and arrangements on Solas and the production and playing is very different to our normal rock n roll approach. We used our home studio much more and embarked on a journey of experimentation without being necessarily too worried about following the traditional rock n roll formula. I played a lot more acoustic instruments such as the mandolin, acoustic guitar, bazouki and this is an album of subtle colours rather than blistering guitar solos!!

Was this an album you feel you couldn’t have made earlier?
Perhaps but it’s very hard to guarantee how any album process will turn out. The muse starts with our emotional state of mind, things we want to express and it sort of snowballs from there. In our early albums we were younger kids who wanted to rock out but now with age we have developed more subtleties in our creativity and tapped into our culture and heritage a little more

So what was the feeling like for you when you got to listen to it in full for the first time?
Pretty nerve wrecking! The album was created from lots of different ideas, experimentation, sketches and we were allowed total freedom to go where we felt it should. When we put it all together you always have that fear that it will sound like lots of parts and not a whole. However, I think you can hear a common musical and creative thread running through it and I have to say I think it really hangs together very well as a full album.

So what if anything did you do differently this time around when making the album compared to previous albums?
We used much more experimental Celtic harmony, arrangements and instrumentation as well as using some electronica and programmed ideas. Obviously as a band we would harness these sketch developments and work them up as a band live performance just to make sure we weren’t going off piste!  I found the whole process to be much more creative and enjoyable as there was a greater sense of liberation in our ideas.

Man I was blown away by the album, so many stand out songs for me but I always like to pick one to ask about and this one was ‘Untrue Colour’ is there a story behind that one you can share with us?
It’s got a bit of an early 80’s Robert Palmer drum beat and we developed it along those lines. The beat is simple and hypnotic coupled with a syncopated vocal rhythm and melody. The track is quite contained and never lets rip but there are some really interesting Ebow and guitar textures that evolve throughout it.

Always have to ask, when do you think we can expect to see you back in Australia?
We would all love to come back to Oz to play again but it’s just so expensive and difficult to make it financially worthwhile. I feel we have neglected Australia in the last number of years through no fault of our own. We loved being signed to Alberts back in the day and those were such great times. Australia rocks and always has done!!

You’ve been a band now for close to seventeen years, rather than ask you what’s changed, what would you say is the one thing that has stayed the same throughout your time together?
It’s not quite that long as it really only started to come together in 2005 so I think we’ve been giving it some welly for the last 11 years! We’ve released 6 albums, toured the world many times and released a DVD of our time on the road with ACDC so there’s been on shortage of output on our part!!

So in being a band for that long and doing so much is there still something that you want to do that you haven’t yet had the opportunity to?
Ah that would be telling! Let’s not even mention a solo album.

Lastly let’s look ahead to the future, finish this sentence for me, in 2017 The Answer want to…
reach more people than ever with their music and we will never stop making what we believe to be great albums!!