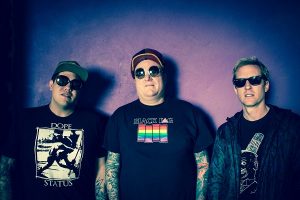 Sublime With Rome are heading back to Australia after a sold out 2012 tour – this time also stopping off in Auckland to treat their NZ fan-base.

Featuring founding members of Sublime along with new frontman, singer/guitarist Rome – Sublime with Rome will reaffirm their affinity with Aussie fans, and reintroduce themselves and Sublime’s classic hits to a New Zealand audience in March 2017.

One of the most notable and successful ska-punk bands of all time, Sublime has sold over 17 million albums worldwide with songs like What I Got, Doin’ Time and Date Rape all in constant radio rotation across the globe. To this day, the group’s multi-platinum landmark debut album ‘40oz. to Freedom’, lo-fi follow up ‘Robbin’ the Hood’, and multi-platinum self-titled major label debut (a virtual greatest hits set in itself) are all widely regarded as music collection staples.

Formed in Long Beach in 1988, Sublime’s final performance was in the spring of 1996 after the death of original singer Bradley Nowell. In 2008 Rome, a 20-year-old northern California native, was introduced to Gaugh and Wilson. In 2011, a handful of jam sessions led to an impromptu show at a small club in Nevada flooring a packed-house crowd. The trio later performed a one-off at the Smokeout Festival and was a surprise special guest at the infamous KROQ Almost Acoustic Christmas show, before officially dubbing themselves Sublime with Rome.

In 2015, Sublime with Rome resurfaced with ‘Sirens’, the effervescent follow up to the band’s 2011 debut ‘Yours Truly’.  “We had more time, we know each other better now, and we’re even better musicians,” said Rome Ramirez last year, who was just 20-years-old when he embarked on this journey. Now 28, the singer, guitarist, and songwriter is truly flourishing.

With bassist and co-founder Eric Wilson anchoring the group, Sublime With Rome are armed with a sound that makes a real statement… their statement.

And while Ramirez pays the utmost respect to the original Sublime entity, since, as he admitted in the past, they were the first band that made him want to make, as opposed to just listen to, music, he knows Sublime With Rome are worthy of fans’ undivided attention. “I want fans to say, ‘I went to see Sublime With Rome and the new album is sick as fuck.’ We can do that by continuing to make better and better records,” he said.

“Sublime has so many fans and attracts new fans every year who were never able to see Sublime perform live after Bradley passed away,” said Troy Nowell-Holmes, Bradley Nowell’s widow. “One of the inspirations for forming ‘Sublime with Rome’ was to bring Brad’s spirit in his music back to the fans and to give the new fans a glimpse of what it was like to see Sublime live.”