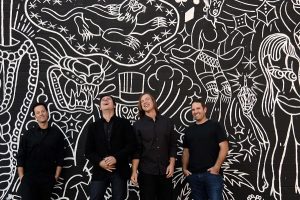 Frontier Touring is thrilled to announce the return to Australia of Jimmy Eat World for three headline shows in January 2017 – their first visit since 2015’s sold-out run.

Jimmy Eat World will undertake three shows only: The Enmore Theatre in Sydney on Wednesday 18 January, The Australian Open Live Stage in Melbourne on Friday 20 January, and Eatons Hill Hotel in Brisbane on Sunday 22 January, 2017.

Late October saw the release of the band’s ninth and arguably best record yet – Integrity Blues (Sony Music Australia), produced by Justin Meldal-Johnsen (Paramore, M83) and featuring ‘Sure and Certain’ and ‘Get Right’.

‘Integrity Blues is an intriguing and varied entry into the band’s back catalogue. Nothing emphasises this more than the title track, which is an atmospheric turn that certainly leaves a mark.’ – Music OMH

Don’t miss your chance to witness Jimmy Eat World in these special headline shows in January 2017.

* Not a Frontier Touring show