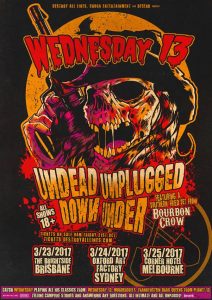 WEDNESDAY 13 has firmly cemented himself as the undisputed leader in Horrorpunk. There is no disputing that. Whether it be fronting his own band or the horrorpunk supergroup, Murderdolls his charisma and appeal can’t be denied.

With a vivid and vile imagination that has endeared him to countless fans of riff-driven macabre over the last two decades,WEDNESDAY 13 has been one of rock’s most prolific protagonists, spreading his credo of grave-robbing rock ‘n’ roll and Hallowe’en debauchery around the globe and unleashing a seemingly endless stream of blood-spattered albums and EPs.

But there is more to the man than just the fiendish persona, a side that Australia will see next March. Wednesday playing all his classics from Wednesday 13, Murderdolls, Frankenstein Drag Queens, Planet 13 and more – BUT this time is will be all intimate and all unplugged! On top of that WEDNESDAY 13 will telling campfire stories and answering questions making it the ultimate fan experience.

“I’m really excited about this Unplugged tour! It’s going to be such a different experience from my normal W13 shows. This tour will see Roman on guitar, along with myself of course, for these shows. I’ve had this idea for some years and I always thought it would be cool to do ‘An Acoustic Evening with…’, along with the stories behind the songs and interacting with the fans. I will be playing music from my entire musical catalogue, from Frankenstein Drag Queens, all the way through Murderdolls and into my solo material.”

TICKETS ON SALE FRIDAY 21st OCTOBER AT 9am.