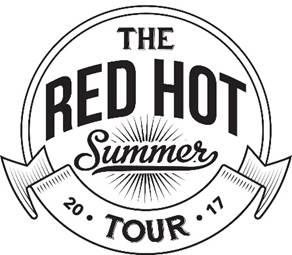 For almost a decade the RED HOT SUMMER TOUR has been smashing records across regional Australia, bringing some of the biggest names in Australian music to Victoria, New South Wales, Tasmania, Queensland and South Australia. After a swag of sell-out shows throughout the summer of 2016, the iconic touring festival is back in 2017 with another stellar bill. The first leg of the RED HOT SUMMER TOUR was released last month, and another run of dates for the second leg of the tour has been announced featuring a legendary line-up. This second leg of the tour will be headlined by the legendary John Farnham with special guests James Reyne, Daryl Braithwaite, Shannon Noll and Taxiride.

RED HOT SUMMER TOUR promoter Duane McDonald says the 2017 touring festival will continue to promote some of the best Australian music on the scene today. “We have been proud to present some fantastic line-ups on the RED HOT SUMMER TOUR over the years,” he says. “This year the tour features two amazing line-ups shared across 14 different shows. We are proud of the evolution of the RED HOT SUMMER TOUR to feature some of the biggest names in the business, and to have the opportunity to take them to regional areas of Australia. The 2017 shows will rock the socks off of music fans.”

There is no doubt about it, John Farnham is the voice of the Australian music industry. Revered as one of the best male vocalists – by both fans and fellow musicians – he has had an incredibly versatile career. He took the hearts of the nation with his debut release as Johnny Farnham in 1967. Fast forward to the 1980s and John Farnham become one of Australia’s favourite sons with an incredible string of smash hit albums. His return to the industry – the 1986 album Whispering Jack – was the first record to sell over a million copies in Australia and its chart topping single You’re The Voice cemented the honey toned solo artist as the ‘voice’ of the country. Over the next several years he released hit after hit, including Pressure Down, Reasons, A Touch of Paradise, Age of Reason, Two Strong Hearts, Angels, Talk of The Town, Chain Reaction, Burn For You, Have A Little Faith (In Us) and That’s Freedom to name a few, including some incredible covers which he made his own, such as When The War Is Over and One. Since the 1980s, he has been selling out stadiums, always incredibly in demand for his live shows. Headlining this leg of the RED HOT SUMMER TOUR, John Farnham will be showcasing a repertoire than spans almost five decades and that promises to be an unforgettable experience.

The multi-award winning Taxiride are a force to be reckoned with. The band smashed onto the Australian music scene in the early 2000s and rapidly became a household name. With Top 5 ARIA platinum selling albums, six Top 40 ARIA singles and a plethora of rave reviews, the band toured massively throughout not only Australia, but also North America, Europe and Asia. Their hits, such as Get Set, Everywhere You Go, Creepin’ Up Slowly, Oh Yeah and You Gotta Help Me, have become ingrained in the Australian psyche.

The RED HOT SUMMER TOUR always sells out well in advance, and year after year it has been proven to be one of the best value for money concert experiences in Australia. Music fans are encouraged to get in early to secure tickets so they don’t miss out as one of the biggest line-ups of Australian music royalty share the same stage.