PUSCIFER return to Australia for National ‘Money $hot – Round Under Tour’ 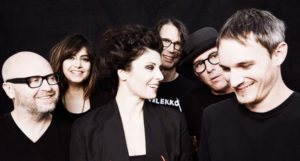 Returning to Australia in January 2017, the genre-defying PUSCIFER will unleash their legendaryMoney $hot – Round Under Tour on audiences around the country across four huge all-ages shows. The Money $hot tour will take in Melbourne’s Plenary MCEC on Sunday 22nd January, Adelaide’s Thebarton Theatre on Monday 23rd January, Sydney’s Darling Harbour Theatre, ICC on Wednesday 25th January and will wrap up with the ultimate Australia Day party at theBrisbane Convention & Exhibition Centre on Thursday 26th January.

Puscifer will descend on Australia straight off the back of a mammoth world tour that marries the concept of concert and theatre, and has been chalking up epic reviews from around the globe:

“Welcome to one of the most intoxicating, semi-befuddling and downright incredible live shows, well, ever… Puscifer’s whole philosophy is about making their live show a unique experience… Nothing is more impressive than the performance, though… one of the best live bands on the planet.” – Kerrang!

“Mindbending, brain-frying, totally unique and definitely worth the wait. Gig of the year. Done.”
– Metal Hammer

“Maynard James Keenan’s vocals were in beautiful harmony with Carina Round’s… (this together with) the stunning visuals that accompanied Puscifer’s show throughout the night, made for an incredible gig that won’t be easily forgotten.” – Loudwire

‘Money Shot’, Puscifer’s third studio album released in October 2015, is the most confident release to date and easily the most openly “Maynard James Keenan” of the bunch.

“I don’t really know how else to talk about it other than it’s more,” says Keenan. “It really is kind of a culmination of all the things I’ve been exposed to and inspired by over the years. That combination of the digital programming combined with that acoustic element of the harmonies…. Trying to find that actual pulse, that breath of life within the digital landscape — and then just going ahead and bringing it in for real.”

“Money Shot takes a more refined approach to all the things that make Puscifer Puscifer“, wroteRolling Stone. “The raunchy sense of humor is still there, but the overall mood of melodically pulsing songs like “Grand Canyon,” “Galileo” and “The Remedy” is darker, more sombre and more reflective… Money Shot feels like the most focused work the band has created to date, and maybe also the most personal.”

Do yourself a favour, and don’t miss this one-off live experience when it rolls into town in January.