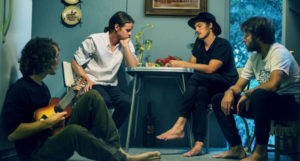 Canadian indie-rockers Half Moon Run reveal an explosive start to the New Year, announcing their return to Australia to play three headline dates this January. The band will head to Brisbane’s The Triffid on Wednesday 11th January, followed by Melbourne’s Corner Hotel on Thursday 12th January and Sydney’s Metro Theatre onSaturday 14th January.

Known for their heavy percussive riffs and layered vocal harmonies, Half Moon Run have carved out a name for themselves since the release of their debut offering ‘Dark Eyes’in 2012, which NME described as a “quietly stunning record”.

Since then, the dynamic four-piece has achieved critical acclaim for their live performances, consistently delivering intense energetic sets that showcase the band’s stunning three-part harmonies and prowess playing multiple instruments on-stage. “From the minute they took the stage, the four-piece had the audience captured in a euphoric trance with their emotive performance”, said UK publication The Upcoming in a five-star review of the band’s recent London Roundhouse show.

Released in October 2015, ‘Sun Leads Me On’ is the sophomore album from Half Moon Run, a record that eschews the alt-folk melancholia of its predecessor in favour of a collective voyage of personal self-discovery. In a glowing review, DIY Mag said, “Half Moon Run sit somewhere between accomplished musicians and potential game-changers”.

Coming off the back of over two years touring the world, ‘Sun Leads Me On’ was recorded in Bathouse Studios, Ontario with Nyles Spencer and producer Jim Abbiss (Arctic Monkeys, Adele, Kasabian, Bombay Bicycle Club, Temper Trap). The 13-track LP is a diverse, spacious and balanced collection of songs that claimed a coveted triple j Feature Album profile on release, with album singles ‘Turn Your Love’ and ‘Trust’ becoming high-rotation staples across the national broadcaster. The album secured a Top 5 debut in Canada, reaching the ARIA Top 40 on release in Australia.

Half Moon Run last month hit the stage for an epic set at the world famous Glastonbury Festival. BBC captured the band delivering a high-intensity rendition of ‘Turn Your Love’, which you can check out here.

This July, Half Moon Run will take the stage at the UK’s Latitude Festival along with an anticipated hometown headline festival appearance at Montreal’s Osheaga Festival, where they will join the likes of Radiohead, Disclosure, Red Hot Chili Peppers, Lana Del Ray and more. August sees the band take on Belgium’s Pukkelpop, followed by the UK’s Reading and Leeds Festivals, making 2016 their biggest touring year yet!

Brought to you by Music Feeds, Laneway Presents & Chugg Entertainment