A DAY TO REMEMBER Australian tour announced, with special guests OF MICE & MEN 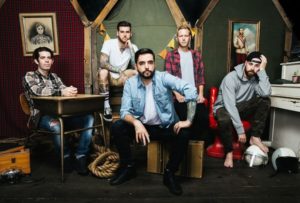 A DAY TO REMEMBER will return to Australia this December for the Bad Vibes Tour featuring special guests OF MICE & MEN. The tour is in support of the forthcoming album, Bad Vibrations, which is available August 19 via ADTR/Epitaph Records.

The shows will be their first Down Under since the epic BIG ASS TOUR which hit arenas last summer and became one of the biggest heavy tours Australia has ever seen. Since then, the Florida natives have been busy finalising the new record, headlining their own Self Help Festival in California, garnering more than eight million streams of their “Paranoia” single and touring North America as direct support the Blink 182.

Tickets will go on sale at 9am on Tuesday, July 12.

Telstra Thanks is bringing an exciting 48-hour pre-sale just for Telstra customers from 9am Wednesday, July 6 until 9am Friday, July 8. For more information on how to purchase, visit: telstra.com/music.

Over the course of the past several years, each of A Day To Remember’s releases have hit No. 1 on Billboard’s Rock, Indie and/or Alternative Charts, they’ve sold in excess of a million units, racked up more than 400 million Spotify streams and 500 million YouTube views, garnered two gold-selling albums and singles (and one silver album in the UK) and sold out entire continental tours, amassing a global fanbase whose members number in the millions. All of which explains why Rolling Stone called them “An Artist You Need To Know.”

Special Guests OF MICE & MEN will be touring in support of their forthcoming album Cold World, which is due out on September 9 via Rise Records. Its lead single “Pain” has reinforced the fact that the Los Angeles-based quintet is fast becoming one of the leaders in the worldwide heavy music space. Over the course of the past few years they have shared stages with artists such as Metallica, Slipknot, Marilyn Manson and Linkin Park, blanketed rock radio airwaves, garnered critical acclaim, amassed more than 153 million Spotify streams, 20 million YouTube views and close to five million social media followers on the strength of a blistering sound and live show. Their Australian return will be their first national club tour since 2013.

TICKETS ON SALE
9AM TUESDAY JULY 12

Telstra Thanks pre-sale:
9am July 6 until 9am July 8