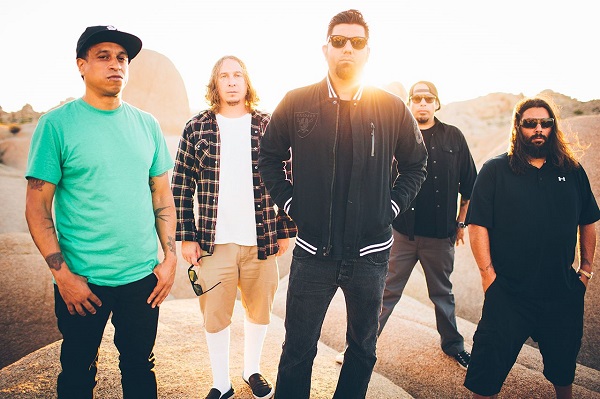 “…there’s no formula, so what works for us is just putting us together in a room and just building a bunch of songs which kind of just come from where we are at the moment, at the time and this record is no different.”

From release: Since Deftones’ inception, the multiplatinum, Grammy-Winning alternative rock band from Sacramento, CA have quietly been pursuing two paths, delivering songs defined by churning, double-fisted aggression while also testing the boundaries of music by incorporating elements of psychedelia and shoegaze. Deftones have released seven albums to date and have sold over 10 million albums worldwide.

At home in Sacramento, California Frank gave us a call to talk about the band’s new album ‘Gore’, touring, timing and more…

‘Gore’ is hitting the shelves in April, how would you personally best describe the album for your fans?
Oh my god! I mean honestly, it’s a Deftones record so whatever that entails *laughs* I would guess maybe the dynamics that I guess our fans are used to, I think we took a little more time on this record to try and concentrate on digesting the ideas a little longer than normal which was a conscious effort. I think if you’ve ever been a fan of my band this record is going to please you just because it’s what we always do is try and take our sound a little further without alienating anyone I guess.

Do you guys always try something different for each record or is the band set on its way of making records?
Well I mean there’s actually no formula to it which is one way of looking at it, but we took our time this time whereas usually I wouldn’t say rush but we would have  window to work in and to try and write, record and finish within a certain timeframe and you can’t always turn it off within that timeframe. I think this time we realised we wanted to take our time, lean into it and without any real deadline and I think it worked out for us because like I said we were able to digest the ideas a little longer and work on things that whereas before I wouldn’t say we rushed some things but you know, it’s a little more spontaneous, not to say this was spontaneous but we were able to live with ideas a little longer.

Was there a concept you had in mind leading up to this record or was it a case of coming together to make it happen?
Yeah that’s kind of how we always do it, there’s never much of a concept going in, we get together, we write it out together and we kind of start making noise and when something pops up that sounds pleasing to everyone we jump up and try and build on it and if we do that for long enough and it doesn’t seem to be going anywhere we’ll pretty much forget it and move on to the next and that’s kind of how we’ve been doing it for the longest. Like I said there’s no formula, so what works for us is just putting us together in a room and just building a bunch of songs which kind of just come from where we are at the moment, at the time and this record is no different.

You’ve now been with the band for six albums, and in that time what do you feel is the biggest change in the way the band works from then until now?
I think our work ethic is a little better, we were younger, not to say that we’ve mastered anything but we’re getting better at what we do whether it’s song writing or just being friends, musicians… after doing this for so long you end up growing, and we’ve learnt a lot of mistakes and you just kind of apply that. I guess the one thing that hasn’t changed is we’re still having fun so that’s a good thing.

You were heading here as part of Soundwave, but we know what happened there, so I have to ask, when do you think we can expect to see you back in Australia?
Hopefully sooner than later, I know there are talks but nothing confirmed yet, but I would love to be able to get down to Australia during the album cycle, I don’t see why we wouldn’t, so hopefully sooner rather than later but nothing is confirmed just yet.

You guys always deliver down here to killer crowds, what do you think it is about Deftones that the fans down here just get about the band?
*laughs* I don’t know, I really don’t know what it is… the shows are amazing, I think we had some really good opportunities early on playing the big festivals like the Big Day Out which was really big for us and going early in our career and playing the little clubs for multiple nights in a row we just have a kinship with the Aussies and we always love going there, but I wouldn’t be able to put my finger on it if I could.

‘White Pony’ really was a kick for the band, what do you think it was about that record that really made people take notice of Deftones?
I think it was just the timing, there was a really big insurgence of younger metal bands and the press kind of coined the term nu-metal and loved to lump all these new bands together and I think people wanted us to kind of ride that wave, and I think just amongst ourselves we’ve always felt a little outside of everything and on our own, we weren’t from LA, we weren’t from new York, we were from Sacramento doing our own thing and we made a record that was not necessarily going along with what the vibe was then, and we wanted to do it to make a statement and prove to ourselves that we don’t have to follow a wave. Doing that set precedent for us and gave us trust in our own ideas and it being a success just solidified for us that we can do this and believing in ourselves and doing what we want and we haven’t looked back since.

So in your time with the band is there still one thing you want to do or one place you haven’t been that you want to tick off?
Oh man, we’ve been to a lot of places, yet to be to like China, yet to be to Dubai and places like that, luckily we’re still able to hit places we’ve yet to be, I think we’re going to a few different new places this year that we’ve never been. I don’t know, we also like returning to different places and I think we’re just happy as long as we can keep this going and enjoying it.