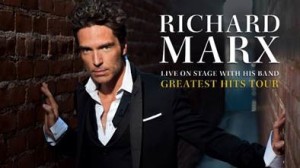 Grammy Award winning artist, Richard Marx, is returning to Australia in June to perform live with his band and will see his national Greatest Hits Tour kick off in Melbourne.  The international superstar last graced our shores in 2006, after playing to packed houses and sold out shows across the country.

Richard Marx is a prolific singer, songwriter and producer whose career spans three decades long and boasts a long list of accolades.  He has sold more than 30 million albums worldwide and to this day, remains the only male artist in history to have his first seven singles reach the Top 5 on the Billboard charts.  Over the course of his stellar career, Richard Marx has written and produced hits for a roster of artists that include Keith Urban, Hugh Jackman, Josh Groban, Barbara Streisand, Kenny Rogers, *NSYNC and Luther Vandross, of which he and Vandross won a Grammy Award for Song of the Year for Dance With My Father.

Across his ever extensive catalogue and 30 million plus CD sales, Marx has released countless worldwide No 1 albums that include the self-titled debutRichard Marx, as well as Repeat Offender and Rush Street, all of which have spawned massive hits such as Hold On To The Night, Should Have Known Better, Don’t Mean Nothing, Endless Summer Nights, Satisfied, Right Here Waiting, Keep Coming Back and Hazard.  Over the decades, these songs became staple tracks that dominated the airwaves globally and in turn, have stood the test of time.  Richard Marx has achieved a seven-year string of triumphs that rivalled any in pop-rock music history.

Says Marx of his pending visit “Australia has always been one of my favourite places to visit and play live – to say I’m excited to return would be a huge understatement.”

These shows promise to deliver Australian audiences a very special evening – so be sure to get your tickets quickly.

Tickets on sale Monday 22nd February at 9.00am (with the exception of Melbourne)

On sale date for the Melbourne show is March 10th at 9.00am

Get social with Richard Marx: