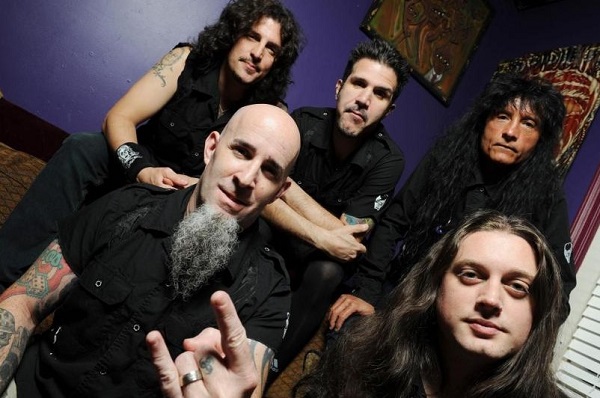 ”You know I just think we’re a much, much more focused in what we want to do and we’ve got a really great way of making things sound better now, I think we’ve advanced as players, singers and all that stuff, musicians in general and we’ve just gotten better , we’ve naturally picked up the pace and that’s a good thing.”

From release: As with any band, ANTHRAX has its creative turbulences, but those add up to their unique chemistry. While all five members contribute ideas and make suggestions to pretty much every song, drummer Charlie Benante makes early writing inroads with foundation riffs and other ideas, rhythm guitarist Scott Ian has a very particular way of incorporating his intense lyrical ideas into the band’s music, Frank Bello has proven to be a very talented melody writer, something that has helped set the band’s music apart from others in the same genre, Joey Belladonna crafts his vocals to best utilize that soaring voice of his, and guitarist Jon Donais brings crushing leads. In the end, the five bring it all together to create what simply is ANTHRAX music.

When you went in to make ‘For All Kings’ was there less pressure in your mind than when you went in to make ‘Worship Music’?
You know I kinda go in and do that same thing, I don’t go in with a lot hanging over me, of course if the album did good like ‘Worship Music’ then hey we’ve got to do something better, it’s there in your mind but there’s nothing you can do about it until you start making the songs work and you just can’t predict that stuff. You can’t really predict any record for that matter, just do your thing and hope for the best, have fun doing it that’s all.

So having the one album back with the band, what was the process like going in to make ‘For All Kings?’ Was it any different than the last one?
Nope, not at all you know. Just spread it out a little bit, obviously it wasn’t interrupted with people come in doing other stuff.  Nope, same deal, same approach as we always do, same with ‘Worship Music’ with me vocally.

Did Jay Ruston push you any further on this one or did he just let you do your thing?
I think in pre-production he was there helping them arrange a few things, I wasn’t there specifically but I assume that he did applied some help I’m sure of it.

You once again worked with Alex Ross on the artwork, he’s almost becoming the sixth member of the band, is he given a directive or is it left up to him with what he comes up with?
I don’t know anything about him, Charlie or Scott would be best to answer that, but hey it’s good art, it’s nice to find someone that can make a great drawing that adapts to your needs.

I have to ask, when do you think we’ll see you back in Australia?
Who knows? We’re gonna be busy I’m sure up to October mid-November, we’ve got South America then Europe, it depends on an offer, it’s a long ways away and a long trip so it’s finding someone that wants to have the band over there for the right reasons you know? I’d love to come over, every time I’ve come over I’ve had a blast. It’s a long flight…

You got a huge reception your last visit here, was it great to be welcomed back by Australian audiences?
Oh yeah, that was great, it was really hot too, oh God… the deck where we play my feet were literally burned I couldn’t believe how warm it was. Great, big shows!

So looking back to 1985 with ‘Spreading The Disease’ what is the biggest change in the way Anthrax work now compared to your first release with them over thirty years ago?
You know I just think we’re a much, much more focused in what we want to do and we’ve got a really great way of making things sound better now, I think we’ve advanced as players, singers and all that stuff, musicians in general and we’ve just gotten better , we’ve naturally picked up the pace and that’s a good thing.

Was it a little different without Rob this time around?
Nothing against Rob, I miss Rob we miss hanging with him… but we roll, we were rolling before he got there and we’re rolling now and I mean yeah, he’s a great player. Jon’s great too, he fits in perfect his leads are even a little similar to Rob’s, so it’s not like we’ve got a whole different guy that does a different type of solo and really changes things up a little bit, but not much, it’s not like a vocal change or style…

As one of the Big 4, is it great to know that Thrash is alive and well in a mostly pop filled scene these days?
Yeah for sure, you mentioned The Big 4, it would be nice to even be asked to do it and Metallica even presented it to us, no one made that name up and I don’t know where it came from but it was a great idea, so any time…

So there’s never been talk of another round?
Nope, I haven’t heard anything yet, I’m sure they’re quite busy doing their own thing. That might have been one of those lucky times we were asked to do it and did it, it would be nice, I’m sure, God, we could do that for a year or two straight and never miss playing somewhere you know?

Lastly let’s look ahead to the future, so finish this sentence for me, the one thing Anthrax wants to do in 2016 is?
Get on the radio *laughs* we’re not really a radio band but it would be nice if people could hear us on the radio…

Latest Release For All Kings (Out Now – Nuclear Blast)