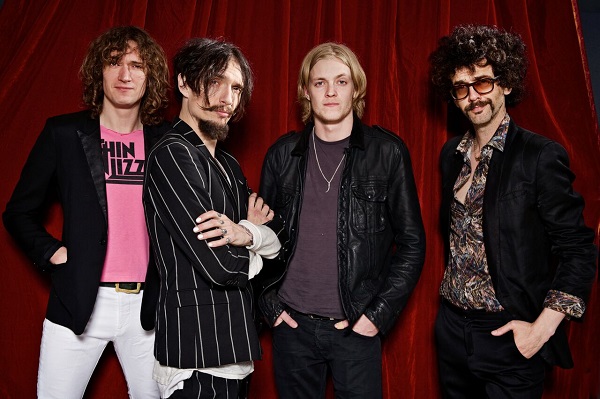 “I think we used the new album to escape from the upheaval we went through, the upheaval with management. Obviously we did the comeback and when you do a comeback for us it wasn’t really a comeback, we just wanted to get together again and do an album…”

From Release: THE DARKNESS, multi award winning, multi-million selling megaband formed in 2000 by The Brothers Hawkins, Frankie Poullain and (now departed) Ed Graham have had good years and bad. And some years where they didn’t actually do anything. This year is a good’un, because THE DARKNESS are back with their brand new fourth album ‘Last of Our Kind’, released in June 2015 and a new drummer Rufus Taylor (son of Queen drummer Roger Taylor), now they are back for an Australian Tour!

In San Francisco after headlining a festival with Die Antwoord and Tenacious D we chatted to Frankie of The Darkness about the upcoming Australian tour, shaping a set, memories, ‘Dinner Lady Arms’ and much more…

Of course we’re here because you’re headed back to see us next month, with a nice little catalogue behind you now, how do you go about shaping the set these days?
Yeah it’s nice to have the four albums to choose from now, it’s just such a great feeling. I guess what we really do is, the whole things with songs is you don’t know when you’ve written it if it’s good or not, no one can, you can only see in the very special ones but there’s a lot of songs that need time to tell you whether not they’re actually good songs, so it changes all the time with each tour. We feel now we’ve chosen to play our nineteen or twenty best songs and that’s what we do in the set list and Justin is playing keyboards actually in a couple of songs. That’s gonna be the first time we’ve done that in Australia, we’re doing that for the first time at the moment in The States and we’re going to have the keyboard down there as well, it’s a Fender Rhodes as well, it’s a lovely sound.

I was lucky to be at your first Sydney headline show at the Gaelic Club, it was amazing. What do you remember about that first tour down here?
*laughs* not much, you never remember much in Australia, just abstract little snapshots because you’ve got the jetlag and then the partying, and also in Australia you’re not on tour busses, when you’re on tour busses you’re leaving maybe three hours after the gig so you can’t get too messed up, well you still get messed up but not in the same way. When you’re staying at a hotel everyone’s just leading you astray, especially as we were younger then… oh geez… well it’s a lot of snapshots of things, situations and hotel rooms and people in them and oh my god, I’ve got all these things but it’s so ungentlemanly to talk about it at my age to talk about that stuff, I sound like a creep…

I was down at Darling Harbour when you were on tour and I remember seeing you guys heading out on a jet boat…
I remember that very clearly, that’s one of the clearest memories, and I also remember going on a yacht with the guy that owned the record label, Michael Gudinski.

‘Last of Our kind’ has recently been released, and in the three years since ‘Hot Cakes’ what helped shape the album?
Upheaval, personal and professional upheaval in a good way, I think we used the new album to escape from the upheaval we went through, the upheaval with management. Obviously we did the comeback and when you do a comeback for us it wasn’t really a comeback, we just wanted to get together again and do an album but the industry perceive it that you’re doing a nostalgia comeback type of thing, for us it was all about ‘Hot Cakes’ but unfortunately when you’ve got management who just exploit that comeback and give us the wrong message as far as we’re concerned. So we changed management in the US and UK, we changed labels US and UK as well, and unfortunately we couldn’t work with Ed Graham any longer also, so we changed drummers. So the album is escapist and it’s impassioned but sonically it’s very warm sounding and Dan Hawkins did a great job, it’s like for me a very hot blooded album.

You’ve also got yourself a newer drummer, has having Rufus in the band helped give The Darkness a new dynamic on stage?
Oh geez, it really has helped the dynamic on stage, it’s just different, the personality of a fourth member can change a dynamic completely you know, he’s obviously the vitality, he’s much younger than us and the sense of humour is there and evident he doesn’t give a shit and has a really healthy reverence which is something we’ve always tried to foster and I mean there’s never been a hint of anything discorded or unpleasant with him he’s just a really great guy you know, really down to earth bearing in mind his background. He’s just a great laugh.

As the bass player you have to get into a groove with your rhythm section, has it been hard to adapt to a new drummer or has it been an easy progress?
No not hard to adapt, I mean it’s always hard and as talented as Dan and Justin are and technically, but I enjoy the fact that he’s pushing me and he pushes the tempo to kind of really dig in and that’s what it should be like you know, it should be tough, he really adds so much power and aggression to the mix.

You’ve also recently played an even newer song in I believe ‘Rack of Glam’ which is a killer title by the way… Can you tell us about this one?
*laughs* Yeah, funny enough, ok so the title came by when we were in a song writing session with LIZ GRIFFITHS, this was just about six weeks ago and we were there for about a week and one day I said isn’t it tedious how everyone always calls us a glam band all the time, and I said why don’t we just make it prophecy, why don’t we just do like a glam song and put the word glam in the title for a play on words. So then we started coming up with words with glam and then there’s a pause and Rufus suddenly said ‘Rack of Glam’ and we all looked at each other and we just knew it had to be the title, and when you’ve got a title that good the song of course Justin worked there and came up with some great lyrics and I’m sure he would agree that it makes the song a lot easier when you’ve got something really strong to guide you. So it’s basically about man’s relationship with breasts but he does it in a very non laddish way but Freudian basically in a way where men are imprisoned by the female bosom.

Does this mean you’re in writing mode and we may see new music much sooner than later?
Yes, exactly, much sooner because we’ve always taken a three year gap between albums and in a sense maybe that makes the albums quite considered which can be a good thing, but what we’d like to do with the next album is make it vibier and much more playful, we’re talking about something like The White Album or The Beastie Boys, Paul’s Boutique, we’re looking for something in that vibe, that’s the idea at the moment. We’re already coming up with tracks and ‘Rack of Glam’ will be one of those, the musical style won’t be like ‘Rack of Glam’, the way that song came about, the playfulness will probably be characteristic of the whole album.

When you look back to ‘Permission To Land’ compared to now, what for you has been the biggest evolution you’ve seen take place within The Darkness?
*pauses* Well, the biggest evolution would be musical accomplishment and technique for sure, I mean ‘Permission To Land’ I guess one of the charms of it is you’ve got these, it’s very raw and you can hear these guys kind of playing and you can hear them struggling playing, but it’s live and vibey, yeah. The songs are powerful but technically it’s not as powerful as it could be, so I guess by our standards it’s relatively lo-fi, some of it veers on the lo-fi and that can be a good thing of course, cause The White Stripes for example, I guess the biggest development has been live that we sound bigger and full bodied, heavier and with Rufus now we’ve just gone to another level, we’re sonically a much heavier band whereas before it was, even with ‘Hot Cakes’ it was quite fizzy and toppy and now there’s a real depth to it.

I have to ask and hear it from the horse’s mouth, my friend Loretta has been pushing and trying for years, is there any chance at all you can play ‘Dinner Lady Arms’ at the Sydney show?
My god it gets requested so often, so often! The thing with ‘Dinner Lady Arms’ it’s the kind of song that an arena band would play, it’s a big production and that’s the problem with a lot of the songs from that second album is that it’s more mid-paced, it’s our least phonetic album ‘One Way Ticket’ and ‘Dinner Lady Arms’ is definitely such a mid-paced song and live we’ve found that the mid-paced songs people don’t come to see us to hear songs like that apart from your friend of course and people who love the song, but it does seem to change the vibe of the live gig, it slows down our heartbeats and we kind of lose our hyped up kind of highly strung delivery that make a Darkness gig like it is. It might just be because we can’t be arsed to learn it again, maybe we will play it in the future, so we can slow down, but we like to go from the extreme, we like to go to the up-tempo stuff from then we have the ‘Love Is Only A Feeling’ type of thing, but the stuff in between sometime it just feels like it doesn’t quite land. But, I wouldn’t rule it out, it’s not going to happen on this tour but it might happen in the future. We are doing ‘English Country Garden’ for the first time in years.

Lastly, let’s look ahead to the future, so finish this sentence for me… In 2016 The Darkness will…
Release their fifth album which will contain a minimum of fourteen tracks…  it’s gonna be our ‘White Album’ if you like, I guess the working title is ‘The Brown Album’… but it won’t end up being the title because that’s too weak…

Well The Beatles had white, Metallica had Black, you can have Brown…
Yeah, so from that point of view it’s logical.

Catch The Darkness on the Blast of Our Kind Australian Tour:

Latest release: Last of Our Kind – (out now)