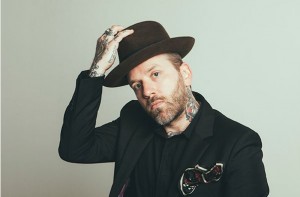 On ground in Sydney, Australia, Dallas Green today announced that City and Colour would be playing shows across Australia next year, adding to the already announced Byron Bay Bluesfestappearance in March 2016.

Following on from their festival performance in Byron Bay, City and Colour will play an intimate show at The Tivoli in Brisbane on Saturday 26th March, something special for his Queensland fans after his last headline performance in Brisbane at the Riverstage and closing the main stage at Splendour in the Grass in 2014.

The tour will then head down to Adelaide’s Thebarton Theatre on 28th March and Perth’s Red Hill Auditorium on 30th March, before returning to a huge Saturday night at Melbourne’s Sidney Myer Music Bowl on 2nd April and Sydney’s Enmore Theatre on 4th April. The tour will wrap up with a very special performance at Anita’s Theatre in Thirroul on Friday 8th April.

Green will return to Australia with a swathe of brand new tunes under his belt, with City and Colour’s fifth studio album If I Should Go Before You released earlier this month and debuting at No.5 on the ARIA Album Chart. The album was recorded at Nashville’s Blackbird Studios, with Green and Karl ‘Horse’ Bareham at the helm and his trusted touring band stepping into the studio; Jack Lawrence (The Raconteurs, The Dead Weather), Dante Schwebel (Spanish Gold, Dan Auerbach, Rumba Shaker), Doug MacGregor (The Constantines) and Matt Kelly, the same band that graced Australian shores for City and Colour’s last national tour in December 2013, performed in the headline spot at Splendour In The Grass last July and watched on as Green played an incredible solo show at the Sydney Opera House. They’ve also performed to massive crowds at Coachella, Bonnaroo, Sasquatch and Lollapalooza, and soon to add the internationally renowned Byron Bay Bluesfest to this impressive list of festivals.

Building on his previous audience by thousands with each Australian visit, Dallas Green’s emotive lyrical narratives and on-stage charm continue to draw new admirers to his dedicated existing fan-base. City and Colour’s December 2013 national tour in support of the album The Hurry and The Harm, which topped the Canadian album chart and debuted at #4 in Australia, saw him perform for over 30,000 fans nationwide.

Since his last Australian visit, Green has collaborated with international hit-maker Pink to create You+Me, the folk-pop duo who released their debut album Rose Ave. in October 2014, hitting No.1 in Canada, No.4 in the US, and reaching No.2 on the Australian ARIA Album Chart.

City and Colour’s 2016 dates will provide a first taste of Green’s new material live, as the engaging singer-songwriter promises to deliver the same raw honesty and dialogue with the crowd that has become his trademark. He will be fresh from a one-off show in Vancouver with musical legend Neil Young followed by extensive US, European and UK tour dates, and will no doubt be raring to provide Australian audiences with a unique City and Colour experience, showcasing his stunning brand new tunes alongside tried and tested crowd favourites.