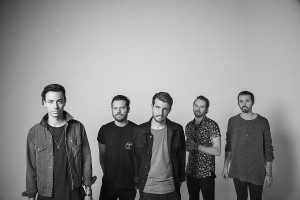 Australian rock band Hands Like Houses are proud to announce a worldwide headline tour in support of their upcoming and third studio album, Dissonants, which will be released this spring through Rise Records. The tour will kick off in Australia on Oct 9th, followed by a U.S. run Oct 23rd-Nov 27, and UK dates Nov 30th-Dec 11th.

“We are unbelievably excited to announce our very first world tour! We’re hitting the roads and skies in support of our brand new album Dissonants this October-December in Australia, the US and UK. Even better, we’re dragging a whole bunch of friends, old and new, along for the ride!” says frontman, Trenton Woodley. Joining Hands Like Houses on the Australian leg of the tour as main support is UK rock band, Lower Than Atlantis, and openers Far Away Stables.

As details of the new album are revealed in the coming weeks, the band has confirmed that they have teamed up again with producer, James Paul Wisner (Paramore, Underoath) who helped the band record their 2013 breakthrough album, Unimagine.

Hands Like Houses has amassed a legion of devoted fans around the world over nearly a decade as a band. They have shared the stage with the likes of Silverstein, Pierce The Veil, Enter Shikari, Tonight Alive and plenty more. The five-piece, consisting of Woodley, Matt Cooper (guitar), Alex Pearson (guitar), Joel Tyrrell (bass) and Matt Parkitny (drums), has headlined tours in four different continents during 2014, including an Australian, US and UK run that sold out most dates. Their upcoming world tour is set to raise the bar.

The band’s 2013 record Unimagine debuted at #37 on Billboard’s Top 200 chart and was followed with massive acclaim and worldwide notoriety that has lead to unprecedented anticipation for their follow up album, Dissonants due out later this year.

Fans can preorder VIP ticket bundles (with album preorder) via www.handslikehouses.net now – get in quick as this offer is available for two weeks only! General Admission tickets for the Dissonants World Tour will go on saleFriday 14 August, 9:30am AEST.

This September-October will see Hands Like Houses take their powerful stage shows to cities around the country including Melbourne, Brisbane, Newcastle, Sydney and Canberra, including a stack of free all ages NSW regional shows sponsored by Indent. Tickets are available at: www.handslikehouses.net – See full details below.
HANDS LIKE HOUSES
DISSONANTS WORLD TOUR
AUSTRALIAN DATES – OCTOBER 2015
With Special Guests Lower Than Atlantis (UK)
and Far Away Stables (AUS)

Tickets on sale Friday 14 August, 9:30am AEST at handslikehouses.net

In March this year, Hands Like Houses released a stand alone single, “I Am”, which debuted at #1 on the Australian iTunes Rock charts, and #2 in the US.  The video has garnered over 1 million views in 4 months.  The song was added to Team Rock Radio, Kerrang Radio, Sirius XM Octane, and was even played on BBC Radio 1. Fans can stream the video for latest song ‘I Am’ on YouTube.

The beginning of 2012 saw Hands Like Houses signing to Rise Records and have since sold just shy of 100k albums worldwide (2012’s Ground Dweller, 2013’s Unimagine, 2014’s Reimagine EP), including an appearance at American Top 40 with the release of their sophomore album Unimagine, which debuted at #37 on Billboard 200 and #51 on the ARIA album chart in 2013. The band has also appeared on two Vans Warped Tours in the US and one in Australia, Download Festival and many more. Hands Like Houses has amassed over 23 million plays on Spotify and their videos have been viewed over 15 million times on Youtube.

Tickets for the 2015 Dissonants World Tour are on sale Friday 14 August, 9:30am AEST at www.handslikehouses.net.

VIP – PRE-ORDER
TICKET + ALBUM BUNDLE
via HandsLikeHouses.net
(for a limited time only)