WIN a copy of the ‘She Who Rocks’ compilation album (CLOSED) 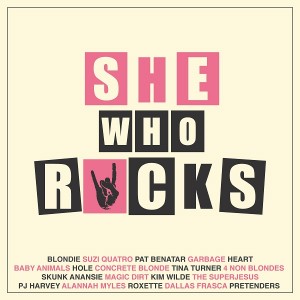 Thanks to our very good friends at Social Family Records, we have THREE copies of the kick ass compilation ‘She Who Rocks’ to give away to three of our lucky readers. She Who Rocks is the ultimate compilation album. Featuring four decades of women who have influenced rock’n’roll, including Blondie, Suzi Quatro, The Pretenders, Heart, Garbage, Roxette, Tina Turner, Baby Animals and more.

So if you want win one of the three copies, simply send us an email to mtrbwy@maytherockbewithyou.com with the subject line of ‘She Who Rocks Album Giveaway’ and include your name, address and the answer to this question…

‘What are the names of the singers in The Baby Animals and The Superjesus?’

Now don’t forget you can catch the ‘She Who Rock’s tour featuring The Baby Animals and The Superjesus at the following dates:

“The support for She Who Rocks across the Facebook page, the tour and interest in the album is completely mind blowing. The fact that this album is inspired by our Facebook community is the best bit. I asked them who their favourite rock chicks are and their favourite songs, and now we’ve created one of the best compilation albums I’ve ever heard,” said Alli Hodge, ahead of the album release.

The first She Who Rocks Tour, featuring Australia’s most revered female-fronted bands, the Baby Animals and The Superjesus, kicks off this May, hitting Perth, Melbourne, Wollongong, Sydney, Brisbane, Adelaide, and Hobart.  Emerging bands have also been invited to register to open the tour via the GiggedIn platform.