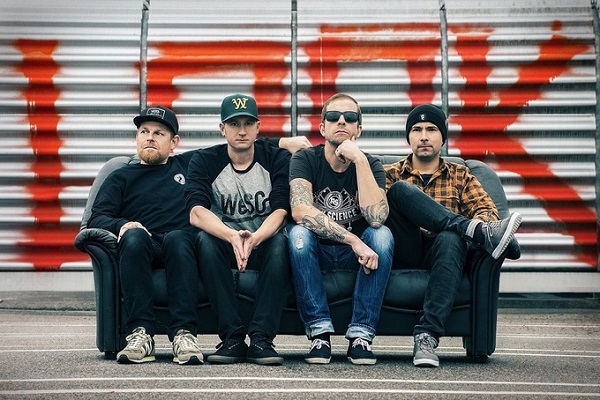 “So this time around we focused on how do we sound when we play live because when we play live that’s really what we are and those songs we choose to play from our records sound a lot like the songs on the new album, so it felt like it’s been a fun and great process trying to bring out the essence of Millencolin in a way.”

From release: Most bands never make it this far in their careers, at least not without a handful of ex-members, lawsuits and various skeletons in their respective closets. And one listen to ‘True Brew’ will tell you that Millencolin are back, they’re as strong as they’ve been in a decade or more and they’ve never lost that fire. ‘True Brew’ is the kind of album that sounds both timeless and modern, a record that could only come out of four adults who have been side by side since they were teenagers, who have weathered changing politics, shifting cultures and the rise and fall of all kinds of musical trends.

We once again caught up with our old mate Erik Ohlsson of Millencolin who is always a pleasure to talk to, and he filled us in on the band’s new album ‘True Brew’ as well as a look back at the band and much more…

Now let’s talk about the new album just about to be released, ‘True Brew’ I have to ask about the title, where did it come from and why was that the choice for the naming rights of the album?
It’s got a couple of meaning, in Swedish when you’re making songs or coming up with riffs on a guitar we say that you boil some notes or brewing some notes and the four of us in the band we’re really contributing, everybody to this final product which is the new album. So we both put in and I’m doing all the graphics and the video stuff like that and Mathias write most of the riffs and Nikola wrote most of the basic ideas for the songs and stuff like that and we all put our work into the brew so it’s like this album is a true brew of the essence of Millencolin in a way, and then Nikola in the last two years has started making his own craft beer and has got a small brewery at his house *laughs* so that was some of the aspect of the title as well.

What can we expect on the album as there was mention of a bit of a return to your roots?
Yeah, it’s been seven years since our last album, and our last album ‘Machine 15’ we tried to do something we haven’t done before, we had a Swedish chamber orchestra playing strings on two or three songs and we wanted a clean well produced product, we did the mixing in Hansa Tonstudio in Germany where U2 had mixed their albums and stuff like that, and that’s fine but looking back on it it didn’t look like Millencolin in a way. So this time around we focused on how do we sound when we play live because when we play live that’s really what we are and those songs we choose to play from our records sound a lot like the songs on the new album, so it felt like it’s been a fun and great process trying to bring out the essence of Millencolin in a way. Also looking back at what influences we had in the beginning, Bad Religion is one of the biggest influences of Millencolin ever and especially on this album. So it’s a punk rock album, it’s got more energy than in a long time.

Crazily it’s your first studio album in almost seven years, was it in a way hard to put together a new record after this long I mean was there too much material to choose from?
Yeah… actually it was a long process, it wasn’t a hard process but it was a long process and at one point we had like twenty five songs so you realise along the way that has to go and that has to go, but we started recording nineteen songs and we took it down to thirteen on the album and we’ve got two finished songs we’re waiting to release somewhere else, so we ended up with fifteen new songs. We still have half-finished a lot of songs too but I think we choose tracks to be on the album, but it was a great process and we own our own recording studio in our home town so it’s been kind of easy for us to go in and out at what hours we want.

In terms of song writing now, how does it differ to your last releases, is it any different now or is it the same formula?
I quite writing songs *laughs* I used to write a lot, especially on our first three albums but more of my creativity goes a lot more with the graphic side of stuff and of course I do my input but its Mathias and Nikola who writes all the music these days I must say. I guess I could but that pair is doing well so let them do it.

It’s been 20 years this year since ‘Life on a Plate’ when you look back at that time did you even think you’d still be making music two decades later?
No no no of course not… it’s weird, when we started a band there was never a thought of getting famous or playing outside of Sweden or whatever, not even getting a record deal so our whole career is kind of crazy from day one and we’re really happy how everything turned out *laughs*. Of course back then you wouldn’t believe that we would be here twenty years into the future for sure.

Now earlier this year you were back for Soundwave, how was it for you this time around?
We enjoyed ourselves, we did it back in 2011 the last time and then we did the Warped tour last year which felt like a mini Soundwave in a way, same promoters and stuff. We love it, and especially like Soundwave is amazing with all the bands, great weather, great people, great hotels and we just love it there.

Prior to that you were here was for Warped Tour, but have graced our shores a number of times, do you have a favourite musical moment from touring Australia?
Oooh… we always have super good shows there, we’re always spoiled with really nice shows so there have been… Australia always seems to surprise us and we’ve done some crazy stuff there. For example we did Big Day Out back in 2002 I think, and back then we played in front of the absolute biggest crowd we’ve ever played in front of, I think it was 65,000 people and that’s just one of those that you always mention in interviews. Then club shows being so great and the first tour we came out for and it was The Living End and Bodyjar opened up for us and that was fun and especially since after that tour and a year from that The Living End took off like crazy.

So what do you still enjoy about being a part of Millencolin?
I love everything about it man, and I also think that we realised that this is our lives, I’ve been a part of Millencolin way longer than before I had even met the guys, so this is the biggest part of my life and I think I just realised that hey this is us and we can’t do anything else or we shouldn’t do anything else *laughs* so it feels really, really good and I’m more excited than ever. Also releasing this album just feels so good and bringing so much positive energy and we’re looking forward to the future…

Lastly, let’s look ahead, finish this sentence for me, by the end of 2015, Millencolin will…
Will… continue touring on the new album ‘True Brew’ but by that time we’d have been doing a lot of shows so far and will continue into 2016…

And keep going and going…
Yeah I guess so… *laughs*