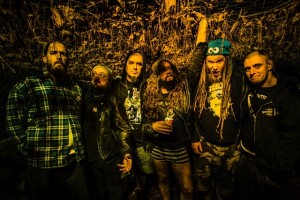 Australia’s premier thrash/grind miscreants, the mighty King Parrot, have signed to EVP Recordings for Australia and will release their new album in May.

The album was recorded by the legendary Philip H. Anselmo at his Nodferatu’s Lair studio in New Orleans, and he says of KP: “King Parrot is not only a great live band, but they are as genuine and down to earth as it gets”.
Fresh from the Soundwave festival, King Parrot are currently causing trouble in Europe and will head back to the US to appear at SXSW and wreak havoc on tour until mid April, before returning to Melbourne.

The band’s debut, Bite Your Head Off, was released in 2013 and they have been biting heads off ever since with their sonic brutality and completely mesmerising live shows.

This May, that cycle begins all over again!