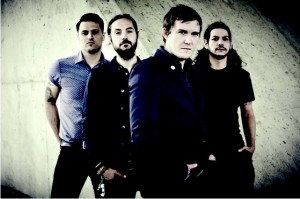 American rockers THE GASLIGHT ANTHEM return to Australia for four pulsating shows in January and February 2015.

“So few hoist the flag of rock ‘n’ roll as proudly and explicitly as The Gaslight Anthem these days.” – Alternative Press.

Local fans are still basking in the glory of their last run down under. “With each tour of Australia, the size of the venue increases…. it’s a testament to a band that write honest rock ‘n’ roll songs and play with a passion that reaches into the core of their fans.” – The AU Review.

The power and appeal of THE GASLIGHT ANTHEM transcends beyond the fans and critics. Ever since he jumped on stage with them at Glastonbury in 2009 (and a few more occasions after that), Bruce Springsteen has been charmed by the on-stage presence and passion of his fellow New Jerseans.

Tickets go on sale Friday 17 October, and with a history of sold out Australian tours, don’t say we didn’t warn you!