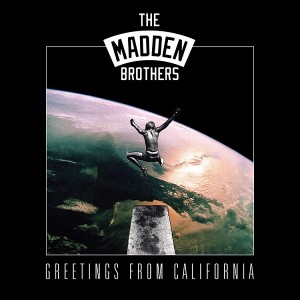 AVAILABLE FOR PRE-ORDER FROM TODAY!

PERFORMING ON THE VOICE & NRL STATE OF ORIGIN GAME III

NEW VIDEO FOR GOLD SINGLE “WE ARE DONE”

The Madden Brothers, Joel and Benji Madden have made their debut album, Greetings From California, available for pre order here today. Those who pre-order the album on iTunes receive two tracks instantly : “California Rain” and the current smash single “We Are Done.” Originally scheduled for October, the album release date has been brought forward  to September 12 due to the fantastic response here, the US and abroad to the first single!

“We Are Done,” the band’s soulful, ’60s-inspired tune written with highly acclaimed producer Eric Valentine and the group’s first official single, is already a Top 5 single in Australia and has just been certified Gold with no signs of slowing down. The band will perform the song live next week on bothThe Voice Australia Monday July 7and NRL State Of Origin Game III Wednesday July 9.

The song’s official music video premiered on VEVO this week and can be seen by clicking on the below:

Having already earned a place in history with Good Charlotte’s radio-ready pop-punk sound captured on such albums as their 3x US platinum (2 x Platinum in Australia) breakthrough The Young and the Hopeless and over 10 million combined sales from their 5 albums sold worldwide, Joel and Benji were eager to flex their creative muscles with an entirely new project. “The idea was to not hide behind a band name or a genre, but rather to write some songs, and find someone to record them and help us deliver the truest picture of who we are musically,” Benji says.

The result is Greetings From California…, which showcases the Maddens’ killer knack for melody, radiant sibling harmonies, and heartfelt story-telling.

Greetings From California will be released in Australian on September 12.