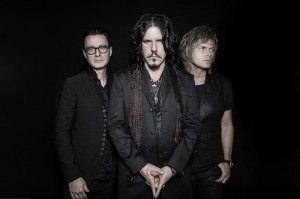 Canadian Rock trio THE TEA PARTY today announce the release of their single ‘Water’s On Fire’ through Anthem/Sony Music Entertainment Australia. This marks the band’s first new music since 2004’s Seven Circles and is a harbinger to a studio album in the coming months.

The original line-up of Jeff Martin, Stuart Chatwood, and Jeff Burrows reunited in 2011 for selected Australian and Canadian live dates and their sense of artistic kinship inevitably led them back to the studio.

“We weren’t compelled to do this,” reflects Martin. “We challenged ourselves to make something together and believe this stands with any statement The Tea Party has made.”

Formed in 1990, The Tea Party have released seven studio albums, selling over two million copies worldwide, filling stadiums on the strength of anthemic hits such as ‘The River’, ‘Sister Awake’, ‘Temptation’, and ‘Heaven Coming Down’. Further album details and tour dates are to be announced in the coming weeks.