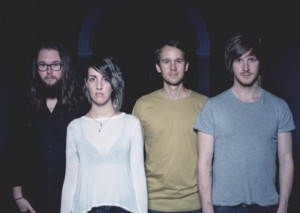 This is the somewhat controversial EP title from NZ rock outfit Ashei. After the success of the first single from the record, ‘Bright Eyes’, a catchy-as-hell, up-tempo and ballsy pop/rock track, the band are proud to be taking their new tunes on the road for a New Zealand and Australian tour.

Led by a unique female voice that reaches both the gritty angst and delicateness of the vocal spectrum, Ashei are a solid rock act but also fresh and a little left of centre. Add to this an intense live performance and honest songwriting and you have a band to keep your eyes fixed on.

So why ‘Music Is Boring’? Ashei is one determined band, working hard on their 5-year DIY journey to create the music they love. The band wanted to pay tribute to all the hard, boring work young bands put in, to contrast with the anything-but-boring music which shows the hard work paying off.

Finding time around their full-time day jobs the committed 4-piece have managed to independently release a scattering of singles and music videos and play as many shows as possible, landing support spots with national and international acts including The Ataris (US) and Scary Kids Scaring Kids (US), Midnight Youth (NZ) and Villainy (NZ).

With a mix of songs a couple years old, to just a few weeks old, Ashei wanted to create a concept of a visual snap shot in the life of the independent band and where they were at during the writing and creation of this EP.

The EP artwork explains the somewhat controversial EP name by showing scenes that any indie band can relate to; breaking down in a van while on tour, long waits in airport terminals, sitting in your less-than-luxurious home writing for hours, countless band practises in their freezing Christchurch, NZ conditions, and hanging around at venues waiting for your chance to show your music to at-times empty rooms.

Drawing on a life time of emo/pop/rock influences such as Taking Back Sunday, The Starting Line, Biffy Clyro, Terminal, and Paramore, “Music is Boring” is a heartfelt but hard-hitting EP catching the attention of rock enthusiasts.

Pre-sale on ashei.bandcamp.com from 21st June