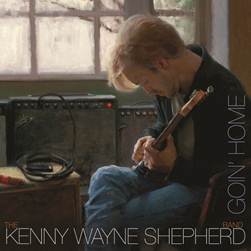 Guitar hero revisits his roots to deliver a musical and personal landmark with a new collection of timeless blues classics due May 30 via Concord Records.

“This is a homecoming in more ways than one,” Kenny Wayne Shepherd says of Goin’ Home, The Kenny Wayne Shepherd Band’s May 30, 2014 debut on Concord Records. “I felt like I was retracing my steps and reliving all the good times that I’ve had in my life because of this music.  And hopefully, that amount of happiness comes through on the album.”

In a 20-year recording career that began when he was just 16, Shepherd has established himself as an immensely popular recording artist, a consistently in-demand live act and an influential force in a worldwide resurgence of interest in the blues. Now, the five-time GRAMMY® nominee delivers one of his most personal projects to date with Goin’ Home, his eighth album and his first to be recorded in his hometown of Shreveport, Louisiana.

Goin’ Home—which continues in the spirit of Shepherd’s widely acclaimed 2007 album/film project 10 Days Out: Blues from the Backroads—came together when Shepherd decided to take advantage of an 11-day gap in his touring schedule. “Everybody was originally gonna fly home and have a break,” he recalls, “but I saw it as an opportunity to make some music. I had been looking for songs and preparing to make a record like this, so I asked the guys in the band for some more song suggestions and we rerouted the tour bus down to Louisiana.”

The process of choosing material for the project allowed Shepherd to relive some of his earliest musical epiphanies. “I dug through tons and tons of songs and artists’ catalogues, trying to find songs that I thought would be right for this record,” he explains. “That brought back all these distinct memories of sitting in the living room in front of the record player and cassette deck as a kid and learning how to play this material.”

The fact that the album was recorded in Shreveport, where Shepherd had come of age musically but had never actually recorded, raised the project’s emotional intensity. “Being in Shreveport really brought me back, and being surrounded by my family and the music that I cut my teeth on brought up a lot of vivid memories.”

Although Shreveport didn’t have a world class recording studio when Shepherd was growing up, the city is now home to Blade Studios, the celebrated facility run by respected drummer/producer Brady Blade, who’s renowned for his work with the likes of Emmylou Harris, Steve Earle and Dave Matthews. Armed with an encyclopedic knowledge of American Blues, Shepherd and his band—singer Noah Hunt, ex-Stevie Ray Vaughan and Double Trouble drummer Chris Layton, former Firm bassist Tony Franklin and keyboardist Riley Osbourn—cut 22 songs, with no studio trickery and minimal overdubbing.

“We did it the way records used to be recorded,” Shepherd explains. “Everything, including the vocals, was basically cut live in the studio with everybody in the same room, with the instruments all bleeding together onto two-inch tape. I wanted to record these songs in the same spirit in which they were originally recorded, so the 11-day time frame was self-imposed. That put pressure on everybody to get it right the first time, and I had the utmost confidence in everyone’s abilities and knowledge.”

“Everybody who performed on the record shared my passion, appreciation and respect for this music, but they’re also all good friends of mine,” Shepherd notes. “It was all pretty casual; I’d just run into people and ask if they wanted to be a part of it, and every one of them contributed something significant to the record.

“I feel like I’ve matured a lot as a musician,” Shepherd concludes. “My purpose for making music is the same as it ever was, but I’ve also learned a lot over the years. Less can be more. The great blues musicians who originally moved me didn’t always have to burn up the neck of the guitar by playing a bunch of notes. They knew how to play the right note at the right time, in a way that just pierces you right to your heart. That was an important lesson, and it’s my goal to move people in that same way that my role models moved me.”