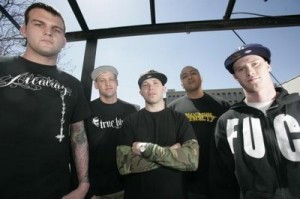 Prepare to go ape-shit as three banging, heavy hitting and all together powerful bands collide for Sidewave shows guaranteed to get you in the pit!

Ten years, nonstop relentless worldwide touring and five albums under their belt, TERROR are heading to Brisbane and Perth so be prepared to be pulverized. ‘Live By The Code’, the band’s latest album and their most loved Vogel claims is the “dirtiest, rawest and most hardcore record we’ve done since Lowest Of The Low ..” The band’s in your face attitude has built them the well – earned reputation as one of the most respected and prominent bands in the hardcore scene. The raw aggression of this band will leave Australian fans reeling.

It’s been awhile since music has had a rebellious voice. Not since Rage Against the Machine put their fist in the air, in the land of hypocrisy has there been such an unmitigated combustion of sonic ferocity fueled by relentless passion and intrepid ideology. At least not until LETLIVE. came along… LA’s post hardcore, volatile four-piece rock band fanned the flames of discontent with their critically praised record, The Blackest Beautiful on release with MusicFeeds claiming

“The Blackest Beautiful is a leap closer to solidifying the truly unique brand of post-hardcore that the boys deliver, and they’re screaming it loud and clear. “

Following the announcement  last year that YOUR DEMISE  have decided to call it a day, Australian fans are in for a massive night as this will be last ever opportunity to see the high tempo, aggressive and awesome power of YOUR DEMISE  live! This gig is not one for the faint hearted. “Your Demise have changed much in the last 3 years, but at least two things remain; their ability to write shit-hot anthems and being able to deliver them onstage without losing a single ounce of the conviction that has helped shape their sound. – www.leedsmusicscene.net